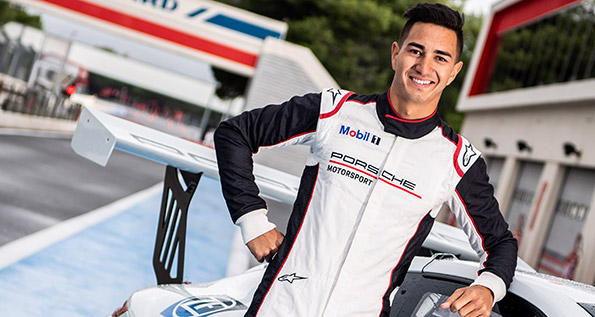 continues its successful sponsorship initiative for talented youngsters in 2019: Jaxon Evans from New Zealand will tackle next season’s Mobil 1 Supercup. All rounds of the high-calibre one-make cup are run as support to Formula 1. In a selection process, the 22-year-old beat ten other international candidates and is now ready to take the next step in his career. For Julien Andlauer (France), 2019 marks his second year as a Junior.

“After carefully analysing the date from the shootout at Le Castellet in France, we chose Jaxon Evans. We are convinced that Jaxon and Julien have the talent to celebrate further successes at an international motorsport level,” says Jennifer Biela-Moll, head of the Motorsport Junior Programme. Andlauer and Evans both receive 225,000 Euros towards their Mobil 1 Supercup campaign. Moreover, the Motorsport Junior Programme package also includes coaching, race analyses at the track, psychological training, individual fitness plans and media relations.

Evans discovered his passion for motor racing as a child, when he and his father watched his cousin compete in New Zealand. His mother also has petrol in her veins and has contested a single-seater series in New Zealand. Born in Levin not far from the Wellington capital, Evans moved to the Australian Gold Coast in 2005 and took up karting at the age of twelve. He underlined his talent by concluding the 2014 ProKart New Zealand Series as vice champion. After advancing to the GT3 Cup Challenge Australia, he took home another two runner-up trophies. The youngster contested the Cup Australia for the first time in 2017. After scoring fifth overall at his debut season, in 2018 he had good reason to celebrate: Evans won the Michelin Junior Programme Australia and secured the title in the Australian Cup. For 2019, he now steps up the motorsport career ladder to drive a 485 hp 911 GT3 Cup in the Mobil 1 Supercup.

“Winning the shootout and receiving backing as a Junior is a dream come true. Matt Campbell took this step in 2017 and his career has developed well. I’m looking forward to this exciting new chapter in my life,” says Evans. As his role model, the new junior racing driver mentions the current Young Professional Campbell as well as his compatriot Earl Bamber. “To be crowned Supercup champion in his first season and then to score overall victory at Le Mans a year later – now that’s impressive.” This success story is typical of the Mobil 1 Supercup as a stepping stone into international GT racing. Out of the current 23-strong squad of works drivers and Young Professionals, nine drivers came up through the one-make cup ranks.

In 2019, Julian Andlauer contests his second year as a Junior. After the Frenchman clinched first place in the 2017 Cup France, he moved up into the Supercup the following year. In this year’s international one-make cup series, the 19-year-old finished in fourth overall. Andlauer performed particularly well at the double-header season finale in Mexico City: On the Autódromo Hermanos Rodríguez the racer from Lyon won both races. Andlauer also achieved a podium result in Spielberg (Austria) and Budapest (Hungary).