It’s the ultimate kick for anyone whose favorite hobby is racing a . The GT3 Cup Experience at ’s own circuit in Leipzig can be the first encounter with a thoroughbred racing car. At this “driving school,” managers like Karlheinz Blessing turn into real race-car drivers.

The stillness heightens the tension. Wind blows softly over the grass. The Leipzig customer center reaches up into the sky like a diamond. An almost unworldly atmosphere has come over the factory grounds. Then instructor Manuel Lauck presses the start button on the 911 GT3 Cup car—and the sound of its 3.8-liter boxer engine awakens the driver’s inner racer with an adrenaline rush. That’s what’s happening to Karlheinz Blessing: a manager turns into a racer.

Away from the racetrack, Blessing (57) is the CEO of Dillinger Hüttenwerke, a steel-producing company in the German Saarland with a history of over three hundred years, and of Saarstahl AG. He studied economics in Constance and earned his doctorate there as well. He is at home with numbers. That fits in well with lap times. In choosing his hobbies, however, Blessing gives free rein to his emotions.

For two years now, Blessing has been entering the Sports Cup with his own 911 GT2, and cradles the trophies he has won in his arms. But he is not a dreamer. As he puts it, “Racing is a complex system, where I push my limits and have to really concentrate my focus. Those are precisely the skills I need as a manager. Racing is helpful to me in this respect.” At the same time, it is a recreational activity that helps him unwind. “There’s no better place to clear your thoughts than in a racing car!” he says. “The rest of the world is far away. When I take a curve at high speed, there’s no way I can be thinking about anything else.”

Blessing is someone who places a premium on performance, in his leisure activities as well as his professional life. That’s why he is here, at the exclusive test course on the Leipzig factory grounds. Having attended numerous events held by the Sport Driving School, he is familiar with the challenging track, which can be driven in multiple combinations. But this time he is entering new territory. He booked the GT3 Cup Experience, an especially high-speed program, with a personal coach and a thoroughbred racing car, the likes of which are used in the Mobil 1 Supercup. 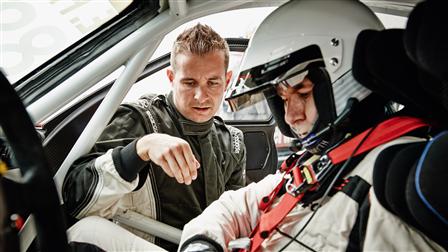 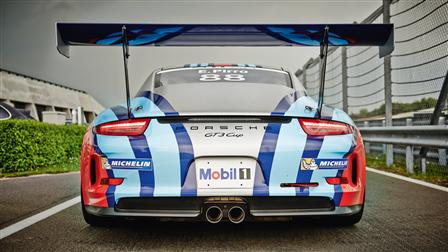 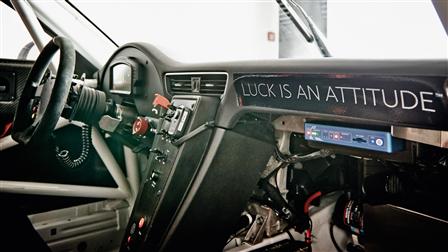 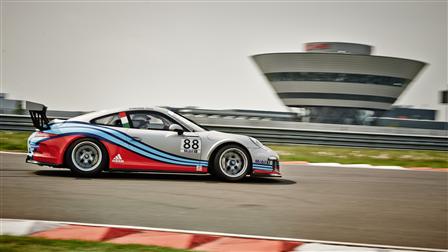 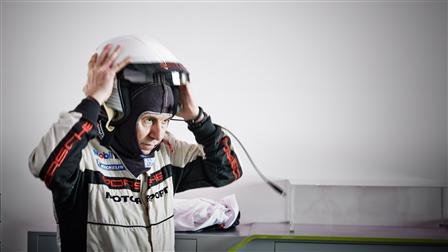 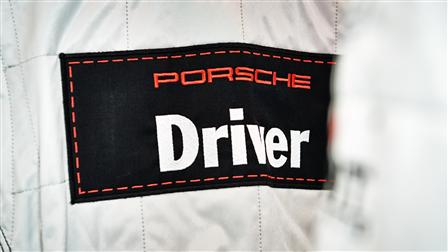 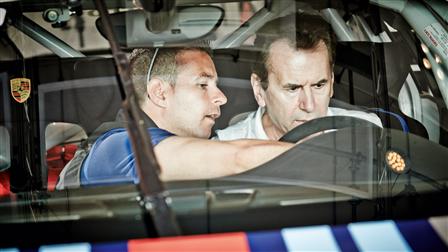 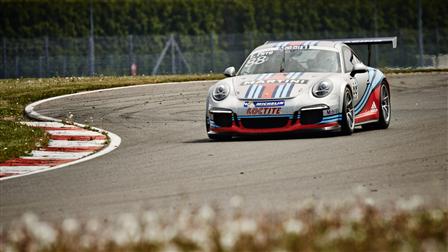 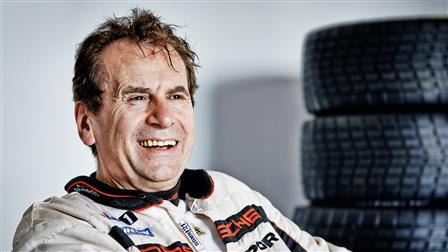 Blessing examines the 911 racer from a crouched position, with a respectful and even reverent air. Instructor Lauck is on his knee beside him. Lauck has the résumé of a classic race-car driver. He started with karting, and then was successful in marque cups and endurance contests. In 2006, recruited the professional racer to be an instructor in Leipzig, where he has taught countless enthusiasts how to race safely.

He starts by pulling the steering wheel out of its mount and explaining the knobs and switches to Blessing. There’s a lot of trust between the coach and his charge. You can hear it in the way they speak with each other. They have known each other for years, are achievement-oriented, and share an enthusiasm for racing.

The program for the GT3 Cup Experience includes four drives of around 15 minutes each in a Cup car, but there is room for individual adjustment. Normally the training begins in a standard GT3 so the student can get to know the course first. But because Blessing has been here often, this part is not needed.

A set part of the program, however, is that the student sits in the passenger seat for the first few laps. Lauck drives. The two can hear each other through an onboard intercom system. Driving at full speed, the coach explains the controls, shift system, braking points, and ideal line. Then he pulls over at the pit.

Blessing climbs out of the cockpit of the Cup racer—no easy task given that the helmet with its protective head-and-neck system makes it even more difficult to squeeze out of the safety cage. “Oh, I have to practice that,” he says with a grin as he walks to the other side of the car. Now, finally, the manager may climb into the driver’s seat. “Just drive at first, get used to it, and then we’ll do the fine-tuning,” says Lauck calmly. He knows about the rush of adrenaline.

“The car drives in such a playful, light, totally easy way—I wouldn’t have expected that,” exclaims Blessing after the first trip. But the instructor warns him to be careful. Blessing had already realized on his own that “without the little helpers, the Cup car drives differently than my standard 911.” Those “little helpers” are the ABS, traction control, and stability control—in other words, everything that provides additional safety to a sports car for everyday use. There’s none of that in the Cup racer, which weighs only 1,150 kilos. “It’s another type of driving,” confirms Lauck. “Braking into a curve without ABS is something completely different.”

One drive follows the next, with de-briefings and data analyses during the breaks. For a moment Blessing might think he’s back in his office, examining a balance sheet on his personal driving performance. The telemetric system mercilessly records every maneuver, and nothing will induce it to modify the results. The zigzag of the data diagrams is supplemented by video images from the onboard camera. “Look, you were quite consistent; the last two laps were just a tenth of a second apart,” says Lauck. This consistency on the ideal line distinguishes good racing drivers from those less skilled. “And here you can see that you braked very well, that’s a straight line. Brake hard, release the brakes, straighten the car, and only then accelerate—that’s the way to do it. Let’s go on to the next round!”

The course in Leipzig, which is not used for any races, has an abundance of space for training racing drivers. Its 3.7-kilometer circuit meets all FIA regulations. It was designed by architect Hermann Tilke to meet international standards; his expertise is behind nearly all of the modern Formula One racing courses. Given free hand in Leipzig, Tilke combined famous curves from around the world—such as the Bus Stop chicane from Spa-Francorchamps and the Curve di Lesmo from Monza—into a fluid ensemble.

Blessing also had to get used to how the car starts up, because the clutch engages in only an extremely small range as it’s needed only to drive off and to put the gears into neutral when stopping. When driving, a light tug on the paddle switches on the steering wheel is all that is needed to change gears. It is a luxury that was not available in the previous model, when you still had to shift and double-clutch. Blessing can hardly contain himself. “Shifting with the paddles is just brilliant! And it’s an awful lot of fun.”

Blessing was a latecomer to . “Something held me back for a long time,” he remarks. “But then when I acquired my first four or five years ago, I immediately got it.” It’s not a matter of the image for him, but rather the technology. “I’m fascinated by the way combines apparent opposites. Like speed and fuel consumption. And that I can drive a road-going GT3 to the bakery, but also on the racetrack—that’s incredible.”

This exclusive training program is determined by a rhythm of driving sessions and subsequent analyses, and runs for nearly five hours. After Blessing’s final stint on the course, which lasts a good 15 minutes, the coach glances at the dia­grams and gives him high marks. “Look, you’re perfect at braking. You were driving very consistently at the end and kept improving your lap times. That’s what we’re looking for.” Blessing is thrilled. “Everything is so much more immediate with this racing car. There’s nothing in between. If I pull hard on the steering wheel, the car responds. When I drive into a curve, I feel the speed of the curve in my whole body.”

But it’s enough for the moment. “You’ve got to deal with many new things all at once, and that takes a lot of effort,” remarks Karlheinz Blessing, the race-car driver. 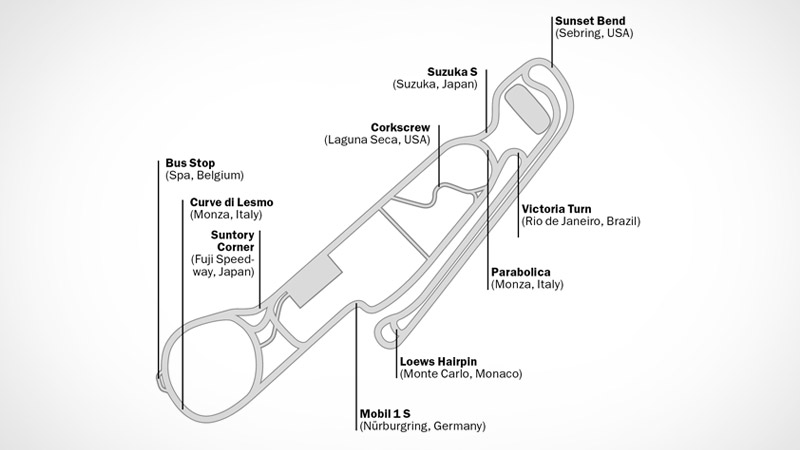 The world’s greatest curves: Every section of the course is modeled on a famous racetrack

The GT3 Cup Experience is available to drivers who have already attended multiple sessions at the Sport Driving School (Performance level) or had comparable training.