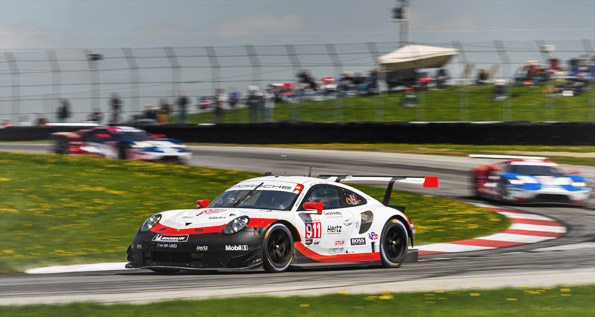 Stuttgart. tackles round seven of the IMSA WeatherTech SportsCar Championship in Lime Rock (USA) holding a 24-point lead in the manufacturers’ classification. After scoring five straight wins, the GT Team now wants to build on this record. With the two prototype classes absent from the Lime Rock event on 19/20 July, the main focal point will be on the two ca. 510 hp 911 RSR fielded by the works team. In the GTD category, the customer squads Park Place Motorsports, Wright Motorsports and Pfaff Motorsports aim to claim a podium spot each with their 911 GT3 R racing cars.

The race
Lime Rock Park in the US state of Connecticut is the shortest racetrack on the IMSA calendar. The short 2.41-kilometre course was built in 1956 in forested parkland about 200 kilometres north of New York City. The flowing layout featuring seven turns makes sub-minute lap times possible. In the past, the GT Team has celebrated big successes on this extraordinary course. In 2017, the American factory squad clinched a one-two victory, and in the 2018 season, Earl Bamber (New Zealand) and Laurens Vanthoor (Belgium) finished on the podium. The two prototype classes will not be contesting the Lime Rock event of the IMSA WeatherTech SportsCar Championship. For this reason, the GT Team will be chasing overall victory in the North American endurance series.

The drivers
The winners of the Sebring and Watkins Glen races, Patrick Pilet (France) and Nick Tandy (Great Britain), share the No. 911 911 RSR. The pair currently ranks second in the drivers’ classification. Their works driver colleagues in the No. 912 sister car, Earl Bamber (New Zealand) and Laurens Vanthoor (Belgium), lead the class after their victories at Long Beach, Mid-Ohio and most recently at Bowmanville, Canada. In the GTD class, three 500+hp 911 GT3 R will compete. The customer team Pfaff Motorsports (No. 9) tackles the race with Young Professional Dennis Olsen (Norway) and Zacharie Robichon from Canada. works driver Patrick Long (USA) shares the cockpit of the No. 73 vehicle run by Park Place Motorsports with Germany’s Marco Seefried. The No. 91 911 GT3 R campaigned by Wright Motorsports is shared by Young Professional Matt Campbell (Australia) and Anthony Imperato (USA).

The vehicles
For its third racing season in North America, the 911 RSR has undergone further optimisation primarily in the setup. Depending on the size of the restrictor, the engine, which is positioned in front of the rear axle, puts out around 375 kW (510 hp). The large rear diffuser combined with a top-mounted rear wing provides aerodynamic efficiency and significant downforce. The 911 GT3 R was newly developed for the 2019 season. Improvements in the areas of aerodynamics and kinematics were systematically implemented from the insights garnered from the many race outings of its predecessor. The six-cylinder engine in the rear of the GT3 customer racer produces over 368 kW (500 hp).

The schedule
The race over 2:40 hours takes off on Saturday, 20 July, at 3:10pm local time (9:10pm CEST) and can be viewed live outside the USA and Canada on www.imsa.com.

Comments before the race

Pascal Zurlinden (Director GT Factory Motorsport): “We are determined to continue our sensational winning streak at Lime Rock. At this race on the small circuit in Connecticut, it would be particularly important to finish in first place – because it’s one of the very few chances in the IMSA series to celebrate overall victory. After our five straight wins, we’re certainly not about to lean back. We’re leading the championship, and it should remain like this to the end of the season.”

Steffen Höllwarth (Programme Manager IMSA SportsCar Championship): “There is no time for drivers, strategists and the crew to catch their breath on this extremely short circuit. Another feature of the Lime Rock course is that there is only one left-hander. This has an impact on the cars’ setup and tyre wear. We’ve always performed well there in past years. I expect we’ll have good chances of continuing our great run over these intense weeks in North America.”

Patrick Pilet ( 911 RSR #911): “I really enjoy racing at Lime Rock; there’s always plenty of action on the short circuit. The course suits our 911 RSR with its relatively short wheelbase. We’ll definitely be competitive there. For me personally, I’d like to reclaim the lead of the drivers’ championship with my teammate Nick. The duel against our works colleagues in the 912 car has been great fun.”

Nick Tandy ( 911 RSR #911): “This is the first race of the season where only GT vehicles compete. Most of all, this changes the traffic situation on the short track, because you don’t constantly get prototypes looming in your rear-view mirror. Overtaking on this flowing, twisty racetrack is very difficult. You have to keep a cool head and have lots of patience. It’s often very warm at Lime Rock at this time of the year. The many laps during a stint, the heavy traffic and the quirks of the track make this race physically exhausting.”

Earl Bamber ( 911 RSR #912): “We’re heading to Lime Rock with five wins in a row. Our goal is to continue this winning streak. I really like Lime Rock Park, mainly because the fast times of around 50 seconds per lap make for spectacular racing. We’ve always been strong there with our 911 RSR, and that’s not about to change this year.”

Laurens Vanthoor ( 911 RSR #912): “At Lime Rock, we’re finally in the limelight with our GT cars. Even though the prototypes don’t contest round seven of the season, there’ll be plenty of action on the track. The course is really narrow and very fast. That means we’ll encounter a lot of traffic out there over the entire distance. Still, this makes it gripping and spectacular but at the same time tricky. has always performed strongly at Lime Rock. After our recent five successive wins, we’re feeling very optimistic but also totally focused. Our great run can only continue if we make the absolute best out of the possibilities once again in the upcoming race. We want to stay at the lead.”

Patrick Long ( 911 GT3 R #73): “Lime Rock Park has a very special atmosphere every year. The short course has a lot of tradition and is always good for exciting and action-packed motor racing. Last year at Lime Rock we were on pole position. Unfortunately, the race didn’t turn out quite so well for us at that time. That should be different this year.”

Matt Campbell ( 911 GT3 R #91): “This year I’m contesting numerous Blancpain GT World Challenge America races with Anthony Imperato and Wright Motorsports. I know my teammate and the squad well, and our teamwork is fantastic. I’m very much looking forward to our first IMSA race together. I’ve heard a lot about the Lime Rock racetrack. I can hardly wait to go racing there.”

This is the IMSA SportsCar Championship

The IMSA SportsCar Championship is a sports car race series that has been contested in the USA and Canada since 2014. The series originated from the merger of the American Le Mans Series and the Grand-Am Series. Sports prototypes and sports cars start in four different classes: GTLM (GT Le Mans), GTD (GT Daytona), Dpi (Daytona Prototype international) and LMP2 (Le Mans Prototype 2). The 911 RSR runs in the GTLM class, and the 911 GT3 R contests the GTD class.