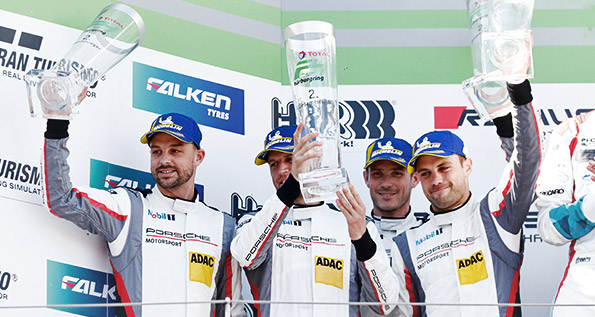 Stuttgart. narrowly missed out on claiming its 13th overall victory after an almost flawless performance. The latest generation of the 911 GT3 R with the starting number 911 fielded by Manthey-Racing had held the lead for 105 of the 157 laps and ultimately had to settle for second place. Three hours before the end of the race, the nine-eleven lost the top spot after receiving a time penalty and was unable to make up lost ground despite setting the fastest pace in the field.

Right from the start, there was no doubt that the crew of the two newly crowned sports car world champions Kévin Estre (France) and Michael Christensen (Denmark) as well as Laurens Vanthoor (Belgium) and Earl Bamber (New Zealand) were determined to win the prestigious endurance race in the Eifel. After a sensational overtaking manoeuvre, Kévin Estre swept into the lead after a good five hours of racing, which he and his teammates then defended for two-thirds of the distance with faultless stints and a perfectly set up 911 GT3 R. Clocking a time of 8:17.745 minutes, Estre also turned the fastest race lap in his last stint. The brutal time penalty of 5:32 minutes due to an overlooked yellow flag dashed all hopes of winning.

There was great excitement with Manthey-Racing’s second 911 GT3 R. The No. 12 vehicle secured fifth place overall, at the same time winning its class in the Pro-Am category. The two Young Professionals Matteo Cairoli (Italy) and Dennis Olsen (Norway) put in a spirited fight with the seasoned specialists Otto Klohs and Lars Kern (both Germany). A week earlier at the Le Mans 24 Hours, a team had claimed victory in the amateur category. The Iron Force by Ring Police squad with the two Germans Jan-Erik Slooten and Lucas Luhr as well as Steve Jans (Luxembourg) and Adrien de Leener (Belgium) brought the No. 8 911 GT3 R home on twelfth place, which handed them fourth in the Pro-Am class.

However, not only the seven 911 GT3 R made an impression at the event. In the near-standard category, too, most of the vehicles that set the pace came from Stuttgart-Zuffenhausen. Eight of the 24 classes were won by teams.

Sebastian Golz (Project Manager 911 GT3 R): “We demonstrated an extremely good performance over the 24 hours with the 911 GT3 R. A strong team worked brilliantly and pulled everything together. Luck wasn’t on our side, and two minor mistakes ultimately meant we couldn’t bring home victory. A commendable second place and class win in the Pro-Am – all in all a good weekend for .”

Earl Bamber ( 911 GT3 R #911): “I think we had the best car and the best crew in the pit lane. We made a mistake and that cost us victory. We spent 5:32 minutes in the pits and lost a good 40 seconds. The shows clearly just how strong we were. Every one of us could have made the mistake that led to this penalty. It’s very hard to see all the slow zones and yellow flags. But such misfortune gives us more motivation to return to the Nürburgring even stronger.”

Kévin Estre ( 911 GT3 R #911): “We led the race convincingly over a long period of time and had a very good car. Unfortunately a mistake cost us the victory. At the Nürburgring it’s not always easy to see the flag signals, and it’s especially challenging to race here at night. My fastest lap underlined how good we were, but unfortunately we finished second today.”

Michael Christensen ( 911 GT3 R #911): “That was a crazy race. So much can happen in 24 hours, but the drivers, team and everyone involved did a great job. Our car was perfectly prepared, the engineers and mechanics gave us the best support. Today simply wasn’t our day.”

Laurens Vanthoor ( 911 GT3 R #911): “We made only one mistake over the entire 24-hour race. I didn’t see the yellow flag. I don’t know how it happened. I can still see the scene in my mind, but even then I didn’t notice it. Unfortunately it had serious consequences. Other than the overlooked flag, the rest of race ran perfectly."

Nicki Raeder (Manthey-Racing): “It’s hard to take in; somehow a repeat of events. At Le Mans we were leading for a long stretch before a penalty threw us back. And now we have to get over this initial disappointment, because second at this tradition-steeped race at the ‘Ring is an incredible result and should be celebrated. I’m particularly happy that we managed to win the Pro-Am class with Otto Klohs and his boys. We can be proud of that too.”

Sven Müller ( 911 GT3 R #31): “I’ve never been as disappointed in my racing career as I am today. The entire team gave their utmost, the car was awesome to drive, all our pit stops ran perfectly. We had a real chance of winning today and then a defect as a result of a puncture stopped us. Simply unbelievable.”

Robert Renauer ( 911 GT3 R #30): “Unfortunately, things didn’t go so well for us. We sustained the same defect twice, which is very disappointing for everyone, because we were running well without any mistakes. Sometimes luck simply isn’t on your side. Still, it was a lot of fun and great to be a part of Frikadelli Racing.”

Dennis Olsen ( 911 GT3 R #12): “We’re thrilled with fifth place. We’ve achieved our goal of winning the Pro-Am class. What’s more, we’re really proud that an amateur-category vehicle finished so far up the field – and with a model of the 911 GT3 R from last year.“

Jörg Bergmeister ( 911 GT3 R #44): “The race didn’t go as we’d hoped. We lost quite a lot of time at the beginning because of the repairs. Our pace improved as the race progressed, which was a positive development. The fact that we flew off the track so close to the end of the race is, of course, very annoying. But that’s racing.”

Lucas Luhr ( 911 GT3 R #8): “We had a few problems early on with the balance and had to change a few details on the car. That improved the situation considerably and, with different tyre compounds, our pace improved. The penalty for a collision in the pit lane was rough. In the meantime, this race has become a sprint and you can’t afford a time penalty of five and a half minutes. This is the first time we’ve competed here as a team and our result is very respectable.”

The 24-hour race at the Nürburgring is one of the largest motorsport events in the world. Around 580 drivers in 158 cars tackled the Eifel classic, with 260,000 spectators witnessing the marathon at the track.