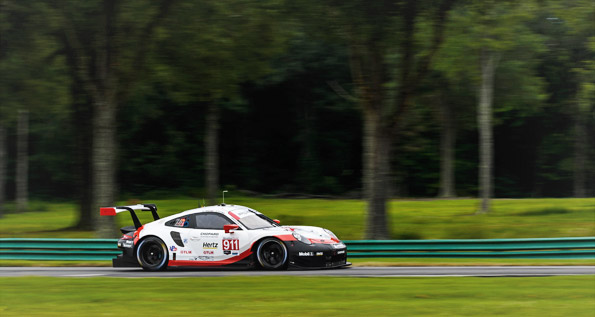 Stuttgart. Track conditions proved to be difficult at the qualifying for the ninth round of the IMSA WeatherTech SportsCar Championship. With the surface drying up slowly after a rain shower, the GT Team claimed the first and sixth spot on the starting grid during the 15-minute qualifying. Laurens Vanthoor (Belgium) lapped the 5.263 kilometre circuit with the ca. 510 hp 911 RSR in 1:40.630 minutes and secured pole position for the team. Nick Tandy (Great Britain) put the vehicle with starting number 911 on sixth. Vanthoor’s pole position is the fifth for the GT Team so far this season.

In the closing stages of the qualifying the circuit, which is located near the town of Alton in the US state of Virginia, allowed increasingly fast laps. Vanthoor’s timing proved to be optimal and enabled the Belgian to put in the fastest time with the number 912 vehicle. Tandy was on a fast lap in the sister car when he ran wide on the wet grass and made contact with the tyre stack. The Briton will tackle Sunday’s 2:40 hour race with Patrick Pilet (France) while Vanthoor shares driving duties with Earl Bamber (New Zealand).

Canada’s Zacharie Robichon set a time of 1:45.826 minutes driving a 500+hp 911 GT3 R in the GTD-class and takes up the race for the Pfaff Motorsports customer team from first place in class. Robichon shares the cockpit with Scott Hargrove (Canada).

Steffen Höllwarth (Programme Manager IMSA SportsCar Championship): “At present the competition in the GTLM class is brutally tough with the margins super tight. There was good and not so good news from this qualifying. The track dried up after a brief shower before the qualifying took off and became faster and faster during the session. Laurens put in a perfect lap at the perfect time. Nick pushed, but then he made a tiny error. Well, this happens. Car number 912 will have a clear track in front of it, for starting number 911 we’ll work out a strategy to get the car to the front during the race. Congratulations to Pfaff Motorsports on the pole with the 911 GT3 R!”

Laurens Vanthoor ( 911 RSR #912): “In these weather conditions the qualifying was like a ride on the knife’s edge. We were not really sure how the track would change after the rain. But in the end taking the risk was rewarded. Earl and I are leading the championship. With this pole position we took the first step to make sure that we stay on top of the classification.”

Nick Tandy ( 911 RSR #911): “I made a tiny mistake and went on the wet grass beside the track and landed in the tyre stacks. That’s annoying but not the end of the world. We’ll find a way to get through the field once the race is on. The good news is our car was fast and our teammates are on pole.”

Zacharie Robichon ( 911 GT3 R #9): “Those track conditions were difficult. After the rain the surface dried up with every lap and the team did a perfect job especially with the timing. It’s fun to drive the 911 in these changeable condition. I am happy that I scored the first pole position for Pfaff Motorsports in the IMSA WeatherTech SportsCar Championship.”