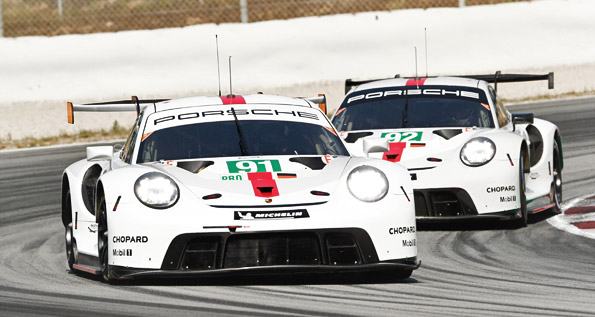 Stuttgart. The new 911 RSR celebrates its race debut at the season-opening round of the FIA World Endurance Championship (WEC). The first race of the 2019/2020 season will be held on the weekend of 30 August to 1 September at the Formula 1 racetrack at Silverstone (Great Britain). The GT Team, which tackles the FIA WEC as the reigning manufacturers’ world champion, fields two ca. 515 hp sports cars from Weissach in the race over four hours. In the GTE-Am category, the customer teams Project 1, Gulf Racing and Dempsey Proton Racing campaign a total of five of last year’s 911 RSR models.

The race
For the first time, the FIA WEC season kicks off in summer. The first round at Silverstone offers another speciality: The Sports Car World Endurance Championship deviates from its standard format of the past with six-hour races. The duration of the race in Great Britain will now be four hours. The storied circuit in the British Midlands, with its legendary passages such as Copse, Stowe and Becketts, poses big challenges for drivers, engineers and teams. Moreover, rain can always be expected in the British Isles, even in late summer. In the past two seasons, the GT Team has achieved a podium result at Silverstone in the fiercely contested GTE-Pro class.

The GT Team drivers
Austria’s Richard Lietz and Gianmaria Bruni from Italy tackle the race in the No. 91 911 RSR. The second 911 RSR (No. 92) is shared by the drivers’ world champions Kévin Estre (France) and Michael Christensen (Denmark). After winning all world titles in the 2018/2019 Super Season, the driver combinations in the two factory cars remains unchanged for the upcoming season.

The customer teams
The previous year’s model with the starting number 56 fielded by the customer team Project 1 is shared by Young Professional Matteo Cairoli (Italy), the reigning GTE-Am champion and Le Mans class winner Egidio Perfetti from Norway as well as David Heinemeier Hansson (Denmark). Sharing driving duties in the No. 57 sister car is the American Ben Keating, Felipe Fraga (Brazil) and the former Mobil 1 Supercup champion Jeroen Bleekemolen from the Netherlands.

The all-British driver line-up of Ben Barker, Andrew Watson and Michael Wainwright will drive the ca. 510 hp No. 86 racer run by the customer team Gulf Racing. Manning the two vehicles fielded by the German squad Dempsey-Proton Racing (#77 and #88) are the two Young Professionals Matt Campbell (Australia) and Thomas Preining (Austria) as well as team owner Christian Ried (Germany) and the Italian Riccardo Pera. With five 911 RSR, the sports car manufacturer from Stuttgart is represented by the largest contingent in the GTE-Am category.

The 911 RSR
The new 911 RSR (2019 model year) contests its maiden race at the season-opening round of the FIA WEC in Silverstone. The vehicle from Weissach, which produces around 515 hp depending on the air restrictor, was launched on the occasion of the Goodwood Festival of Speed (Great Britain) in July 2019. Compared to its extremely successful predecessor model, the car for the GTE-Pro class of the FIA WEC received improvements to areas such as driveability, efficiency, ergonomics and serviceability. About 95 percent of the car is new. The 911 RSR is powered by a 4.2-litre, six-cylinder boxer engine.

The schedule
The four-hour FIA WEC race at Silverstone gets underway on Sunday, 1 September at midday local time (1pm CEST).

The race on TV and the Internet
A live broadcast of the season-opening round of the FIA WEC will be shown on www.sport1.de. The free-to-air station Sport 1 will broadcast comprehensive highlights of the Silverstone race in the GT Magazine on 1 September from 10.45pm. Eurosport televises the final phase live from 3.50pm. The pay-TV channel Motorsport.TV televises the first race of the season in full length. For a fee, the FIA WEC app offers live streaming and live timing.

Comments before the race

Fritz Enzinger (Vice President Motorsport): “During extensive tests as well as the prologue of the FIA WEC in Barcelona, the new 911 RSR ran without problems. We’re turning up as the world champions with a clear goal: to defend the title. The car is brand new and progress has been achieved in many areas compared to the successful predecessor. With the team and the driver crews in the two sports cars, we’re sticking with our trusty specialists. And although the tension is high amongst everyone involved in the first race of a new car – all the signs look excellent to yield more successes.”

Pascal Zurlinden (Director GT Factory Motorsport): “There are a few innovations for the new FIA WEC season. The series starts in summer with the Silverstone event, the race distances have changed and our rivals in the GTE-Pro category have a season of experience with their vehicles under their belt. We’re at the very beginning with our new car, but we’ve managed to prepare perfectly for the new challenges. The team, drivers and the new 911 RSR are ready for the start. We’re eager to build on the world-class performances of last season with more successes.”

Alexander Stehlig (Programme Manager FIA WEC): “The last 18 months have been very intense. Parallel to our world championship season, we conducted comprehensive tests with the new 911 RSR. For this reason, we’re all looking forward to finally tackling the first race with our new car. Despite all the changes, there are two important constants: our two driver pairings and the team behind the mission. So we’re very confident we’re following in the great footsteps of our old RSR and in doing well at the Silverstone race.”

Richard Lietz ( 911 RSR #91): “Starting the new season in summer takes a bit of getting used to. This is a consequence of the FIA WEC’s so-called ‘winter calendar’. I’m pleased that, after a period of intensive testing, the time has finally come to go racing with our new 911 RSR. The competitive environment has changed for the upcoming season, but the class remains extremely competitive with excellent cars and fast, seasoned drivers. Our vehicle is new and we still have a lot to learn, but I’m hoping for a top result at the first race of the season.”

Gianmaria Bruni ( 911 RSR #91): “At the unveiling of the new 911 RSR I got goose bumps when I had the chance to drive up the hill at Goodwood in front of avid fans. Now we’ll take our new baby for its first race. I’m curious and excited to tackle my second FIA WEC season for . I have ambitious goals for me and my teammate Richard Lietz. We aim to be at the very front this season.”

Kévin Estre ( 911 RSR #92): “To be able to take on the new season as world champion is a very special feeling, of course. The anticipation is huge. We’re facing a major challenge because we’re competing with a brand new vehicle. Everything ran perfectly with the tests, and the results at the prologue looked good, too. Still, we have to wait and see where we actually stand compared to the competition. Silverstone always attracts a lot of spectators. This and the fact that it’s a terrific track make the race a lot of fun.”

Michael Christensen ( 911 RSR #92): “Of course, as last year’s champions our goals are high. We want to win and claim more titles. The new 911 RSR impressed us during the tests. Now we’re all very curious to see how the vehicle performs in direct comparison to the competition. The fact that our team is strong is totally beyond question after winning the world championship. We have all the ingredients for further successes.”

Matteo Cairoli ( 911 RSR #56): “I’m taking on the 2019/2020 season for a new team, but I’m already familiar with the squad. In 2015 I contested the one-make cups with Project 1. Winning the title in its WEC debut season underlines how strong the team is in endurance racing. I’m heading to Silverstone feeling motivated and full of energy. I’m looking forward to working with Egidio and David. We are keen to continue the successes of last season.”

Matt Campbell ( 911 RSR #77): “I’m delighted to head into my second FIA WEC season again with Dempsey-Proton Racing. We’re a well-oiled team. We demonstrated this clearly with top results last season. Unfortunately it wasn’t quite enough to bring home the title, but we aim to change that this season. We have every opportunity to win the championship in the GTE-Am class and we want to lay the foundation for this with a victory at Silverstone.”

Thomas Preining ( 911 RSR #88): “That fact that the new season begins a good two months after the big season finale at Le Mans feels a little strange. There was no real break. For me as a driver that’s good, because I’d be happy to drive the 911 RSR every day. I’m curious about my new team. I like the Silverstone Circuit. It has fast passages and there are always fantastic duels. If you want to be successful there, you have to manage your tyres perfectly. That’s what we’ll focus on.”

In the Sports Car World Endurance Championship (WEC), which was first contested in 2012, sports prototypes and GT vehicles compete in four classes: LMP1, LMP2, GTE-Pro and GTE-Am. They all compete together in one race but are classified separately. The factory squad contests the GTE-Pro class as the reigning world manufacturers’ champions, while the customer teams Dempsey Proton Racing, Project 1 and Gulf Racing fight for honours in the GTE-Am class.