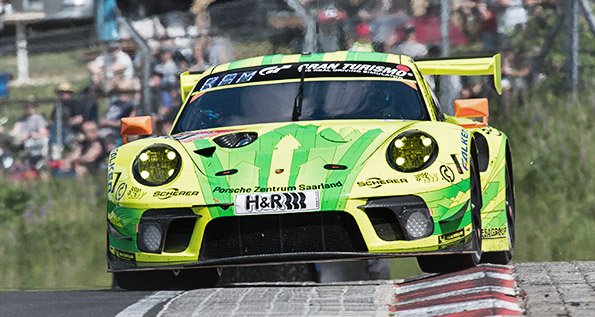 Stuttgart. The best customer team takes up the 24-hour classic on the Nürburgring from position three on the grid. At the Top Qualifying session, Laurens Vanthoor (Belgium) lapped the 25.378 kilometre racetrack in the No. 911 911 GT3 R fielded by Manthey-Racing in 8:11.567 minutes. With this, he and his teammates Earl Bamber (New Zealand), Michael Christensen (Denmark) and Kévin Estre (France) have secured a very good starting baseline to tackle the race.

The 28 fastest cars headed off into the individual time trials at ten-second intervals to attempt two quick laps on the Grand Prix circuit and Nordschleife combination. Mathieu Jaminet was the first driver to tackle the decisive qualifier. The Frenchman, who shares the cockpit with Matt Campbell (Australia), Romain Dumas (France) and Sven Müller (Germany), clocked the fifth fastest time with his No. 31 500+hp nine-eleven from Weissach on fifth place. This made Frikadelli Racing the second best customer team at the Top Qualifying on the Nürburgring.

Frédéric Makowiecki (France) scored the seventh fastest time in the cockpit of Manthey-Racing’s title-defending 911 GT3 R with the starting number 1. With this grid spot, the experienced squad from Meuspath, with Richard Lietz (Austria), Patrick Pilet (France) and Nick Tandy (Great Britain), has the best chances of repeating last year’s triumph. The third 911 GT3 R run by Manthey-Racing with Matteo Cairoli (Italy) and Dennis Olsen (Norway) as well as the two German drivers Otto Klohs and Lars Kern takes up the Eifel classic on Saturday from twelfth. Klaus Bachler, Martin Ragginger (both Austria), Jörg Bergmeister and Dirk Werner (both Germany) head into the Nürburgring 24-hour race for Falken Motorsports from P18 in their 911 GT3 R (#44). The IronForce by Ring Police squad with drivers Lucas Luhr (Germany), Jan-Erik Slooten (Germany), Steve Jans (Luxembourg) and Adrien de Leener (Belgium) concluded the qualifying on 24th with the No. 8 911 GT3 R.

Quotes from the Top Qualifying

Sebastian Golz (Project Manager 911 GT3 R): “As expected, the result of the qualifying was very close. The gap between the frontrunners is tight. I’m very pleased with position three and also with the performances of the other 911 GT3 R. Hopefully we’ll squeeze out the last remaining bit in the race.”

Laurens Vanthoor ( 911 GT3 R #911): “My second lap was a little better than my first. But unfortunately I made a minor mistake and that ruined my chances of a better time. Still, third place is a very good starting position for such a race. The car is agile and very well balanced. I’m really looking forward to the race. However, as we’ve experienced often enough, anything can happen here at the Nürburgring.”

Mathieu Jaminet ( 911 GT3 R #31): “My lap was actually quite good. Maybe I could have done a little better in the first flying lap on fresh tyres, but the fifth and second best is pretty good. I was actually at the limit in all sectors and I took quite a risk. The pressure was enormous, but I had a lot of fun. We’re starting from the front of the field, which initially means not a lot of traffic. But the race is long and a lot can happen.”

Frédéric Makowiecki ( 911 GT3 R #1): “The setup we chose wasn’t quite right for the conditions compared to the previous sessions. We now have to assess the reason for this. The handling in the right and left-hand corners was very different. Of course, the qualifying isn’t the most important thing, but we’ll work on our vehicle setup again in time for the race.”

Matteo Cairoli ( 911 GT3 R #12): “At the end of the day, I’m very satisfied. I pushed hard, but I encountered a yellow flag during my fast lap and I had to slow down. Twelfth on the grid for the 24-hour race is absolutely okay. Anything can happen during the race. We have a fast car and we’re heading into the race with a good feeling.”

Klaus Bachler ( 911 GT3 R #44): “It’s actually crazy to get such a free run on the Nordschleife. That happens only once a year at the Top Qualifying. My lap was pretty good, but I didn’t manage to string all the sectors together perfectly. Still, we can live with P18. I’m really looking forward to the race.”

Lucas Luhr ( 911 GT3 R #8): “My stint was okay, but I could have pushed a little more at certain points in my first lap. The gap to the top two is very big, but the cards will be reshuffled in the race.”

The 24-hour race at the Nürburgring is one of the largest motorsport events in the world, to which more than 200,000 spectators are expected. 158 cars and around 580 drivers will head into the Eifel classic at 3.30pm on Saturday.