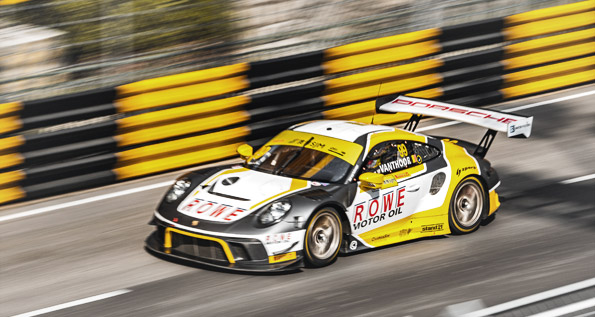 Stuttgart. The best 911 GT3 R takes up the qualifying race at the FIA GT World Cup in Macau (China) from third place. Works driver Earl Bamber (New Zealand) lapped the 6.1-kilometre Guia Circuit in the No. 98 vehicle in a time of 2:16.066 minutes. Laurens Vanthoor (Belgium), who also competes for the Rowe Racing team, planted the No. 99 sister car on fourth position. Driving for Absolute Racing, Alexandre Imperatori (Switzerland) and Kévin Estre (France) qualified on positions nine and 14 respectively.

The qualifying on the fast street circuit in Asia’s gambling paradise was red-flagged twice. For Bamber and Vanthoor, who had turned the fastest laps in free practice on Thursday and Friday, these interruptions proved unfortunate. The two works drivers and the reigning IMSA champions were forced to abandon their flying laps.

The reigning World Sports Car Champion Estre experienced a difficult qualifying session. The Frenchman, whose 500 hp 911 GT3 R (No. 912) sustained damages in an accident during the second free practice, could only rejoin the action at a later stage after extensive repairs. His Absolute Racing teammate, Imperatori, secured a respectable starting spot with ninth place.

Sebastian Golz (Project Manager 911 GT3 R): “That was a chaotic qualifying. The two 911 GT3 R fielded by Rowe Racing are well positioned on positions three and four, but more would have been possible. The split times on the fastest laps looked promising, but both red flags came out at the worst possible moment. So they remained in their second row positions. We are heading to race day feeling positive because, as the practice sessions have underlined, we have the necessary performance. I’m relieved that Kévin’s car was back in action just in time after the accident. All four of our cars will start the qualifying race on Saturday.”

Earl Bamber ( 911 GT3 R #98): “Our car was really good in qualifying. The fact that our lap times were faster than the best results from the practice underscores this. Still, it wasn’t quite enough for the top. I don’t know where the others suddenly found the speed. P3 is a decent starting position for the qualifying race. I definitely have the chance to fight for victory from here.”

Laurens Vanthoor ( 911 GT3 R #99): “I’m not very happy. In the run-up to our qualifying in Macau there were a lot of delays so that our session started much later. The sun had almost set and the temperatures were lower than expected. This affected our car’s balance. And I didn’t get the best out of the car either. I made a minor mistake on every lap. Now Earl and I line up alongside each other on the second grid row. I hope we can make up ground at the start of the qualifying race.”

Alexandre Imperatori ( 911 GT3 R #911): “I’m disappointed, because a lot more would have been possible. My sector times were good and I was on clearly improving. Ironically, the red flag came out in the last corner and I had to abandon my flying lap. I simply didn’t perform at my best at the limit on my second set of tyres. In some places I overdid it and touched the barriers – typical for Macau. Unfortunately, it was only good for ninth. There was definitely potential for a much better result.”

Kévin Estre ( 911 GT3 R #912): “I’m pleased that I was still able to take part in the qualifying after my accident. The Absolute Racing team did great work with the colleagues from Motorsport and Rowe Racing. Fifteen minutes after the start of the qualifying my car was back on its wheels. Unfortunately there were still a few components on the vehicle that didn’t work perfectly. Under these circumstances, I couldn’t achieve more. I hope I can still work my way up the order in the qualifying race.”