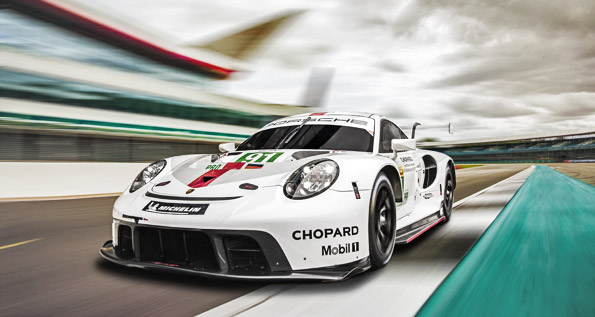 Stuttgart. The new 911 RSR (2019 model year) will start its racing debut from the second grid row. In qualifying for the season-opening round of the FIA World Endurance Championship at Silverstone (Great Britain), the Italian Gianmaria Bruni and his Austrian works driver teammate Richard Lietz planted the No. 91 car on fourth place. The reigning world champions Kévin Estre (France) and Michael Christensen (Denmark) claimed the sixth grid spot in the ca. 515 hp sister car with the starting number 92.

Between the third free practice in the morning and the qualifying session at midday, the track conditions at the British Formula 1 circuit had changed significantly. The two new 911 RSR, which had performed impressively in the first session of the day, were not ideally setup for the different conditions. Bruni spun early in his second flying lap. A subsequent tyre defect damaged the front of the No. 91 vehicle. The mechanics repaired the vehicle in record time so that teammate Lietz could clock a good lap time to secure fourth place. Christensen and Estre veered from the ideal line several times during their hot laps due to a less than optimal vehicle balance. Under these circumstances, more than sixth place on the grid was not possible.

In the GTE-Am class, Young Professional Matteo Cairoli (Italy) and Egidio Perfetti (Norway) turned the second quickest time in the 911 RSR from last year. The pair share the cockpit of the No. 56 car fielded by the Project 1 squad for the four-hour race on Sunday (start at 1pm CEST) with Germany’s David Kolkmann.

Pascal Zurlinden (Director Factory Motorsport): “The qualifying didn’t go quite as we’d anticipated. The cars weren’t as well balanced as they had been in the previous practices, which resulted in our drivers making several mistakes. A lot is possible from positions four and six. We’re heading into the race feeling optimistic, because our new car has clearly underlined its qualities during practice with excellent consistency and fast lap times. Apart from the qualifying, our debut weekend has gone very well so far. I hope this continues in the race.”

Alexander Stehlig (Head of Operations FIA WEC): “Our drivers were extremely pleased with the vehicle handling in the practice sessions. Unfortunately, it wasn’t quite right in the qualifying. The balance and the tyre pressure were not within the perfect window. That’s why we’re not on the starting positions we’d aimed for. We’ll now analyse the data closely and draw our conclusions for Sunday. We’ll go all-out in the race and underline the strengths of our new car.”

Gianmaria Bruni ( 911 RSR #91): “After my first fast lap I wanted to really go for it on the second lap. Then, as if out of nowhere, I spun in the second corner – in a spot where we hardly steer and never had problems. The spin caused a tyre problem, which then damaged part of the front. Our crew did a first-class job in repairing it quickly. Richard managed to turn a good lap and kept us on fourth place.”

Richard Lietz ( 911 RSR #91): “We experienced a lot in the short qualifying: spin, tyre defect, damage to the front. That was really intense. I was able to turn my laps normally after the repairs. Ultimately, fourth place was possible – a position that is absolutely fine for the first outing of the new 911 RSR.”

Kévin Estre ( 911 RSR #92): “Michael fought really hard with the car on his lap. When he came into the pits, we made some last minute changes to a few settings for my part of the qualifying. That had a positive effect, although it was far from perfect. I think we underestimated the track changes. We’re learning fast, so anything is possible on Sunday.”

Michael Christensen ( 911 RSR #92): “The qualifying was really difficult. All of a sudden the balance was off and the car became hard to control. My only focus was to try and prevent a spin. Under the circumstances, no really fast laps were possible today, which is a great pity. We’ll be better in the race.”

Egidio Perfetti ( 911 RSR #56): “The qualifying was gripping and spectacular. Our 911 RSR performed really well in the first fast lap. I could virtually make perfect use of the tyre grip. In the second flying lap, the rear tyres had deteriorated slightly, which caused my car to oversteer a little. It was exactly the same during Matteo’s attempts. Improvements were no longer possible. Still, second place is a great starting point for us.”