Where does a race car begin, where does the street-legal version end? When it comes to the current 911 GT3, the first segues seamlessly into the second, says Danish Cup driver Michelle Gatting.

In terms of personality, Michelle Sophie Gatting and the 911 GT3 have much in common. We see at a glance that they share a sporty character, and there is a hint of ambition as well. We suspect that that is only the beginning. But what lies hidden? Michelle Gatting is a tall young woman with alert, light eyes and long flaxen hair, and it’s easy to picture her as a literature major, playing a violin. As for the 911 GT3, it swims along with the tide of city traffic, rolls peacefully through 30 km/h speed-limit zones, and tries to be inconspicuous while relaxing its muscles.

But watch out, world, when they let go. Because Michelle Gatting is a professional race-car driver. The 20-year-old not only battles the big guys on the racetrack. Her hobbies include fitness, boxing, and CrossFit workouts (which the U.S. Army uses to keep its troops-in-fighting trim). “Yeah,” says the Dane in her deep voice, “I’ve always been a tough girl. I race, I enjoy boxing.” And the 911 GT3? Why, it’s the most extreme representative of its kind. Every carries the racing gene, of course, but this one is the ultimate performer. And no, not because of the bright red paint. It’s just one small step from the street-legal 911 GT3 to its brother, the 911 GT3 Cup race car. No other 911 comes closer. The 3.8-liter six-cylinder boxer engine produces 350 kW (475 hp), and takes the street version from zero to 100 km/h in a mere 3.5 seconds.

The two 911 brothers meet in Nuremberg. The occasion: a Cup Deutschland race on the Noris­ring, where the racing version of the 911 GT3 will be put through its paces. Since the start of the season, there has been one woman among the nearly forty contenders in the starting lineup for the one-make cup. That one woman is Michelle Gatting. It’s nothing new for her. “I’ve been racing for thirteen years. And most of my rivals have been guys,” she says with a shrug. She strolls out of the hotel in a pair of shorts, T-shirt, and strap sandals. She’ll be driving the “civilian” 911 GT3 to the racetrack. But first things first: Gatting stands in front of the car. “The car is simply gorgeous,” she says reverently. “I especially love the wide rear end. The magnificent tail, the large wheel arches, the rear wings, and the wide tires—those are all I need to see the relationship to racing.”

She’s equally at home sitting behind the wheel of the Cup race car or the street-legal version. “My boyfriend is from a family,” she says, “and I can even borrow one of the models on occasion.” She looks slightly abashed. “It’s unusual that a young thing like me would be allowed to drive such a fantastic car.” 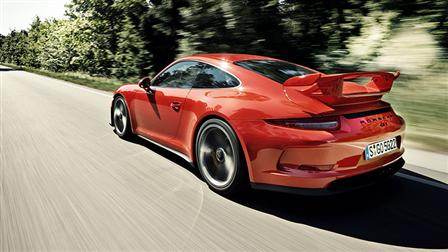 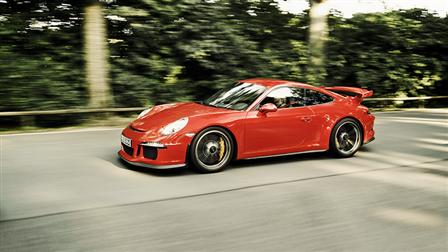 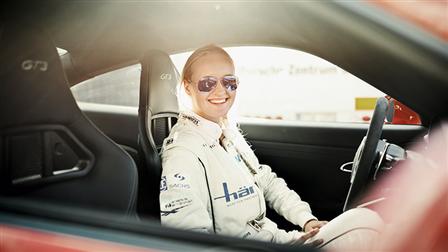 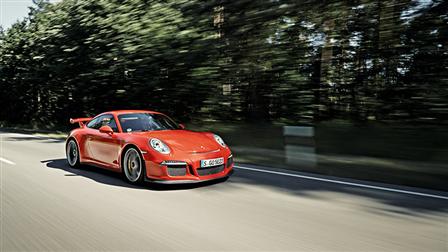 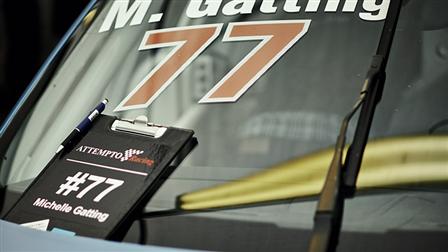 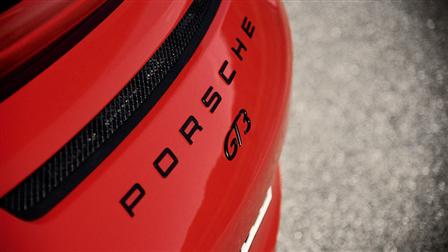 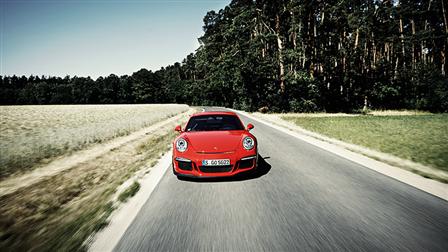 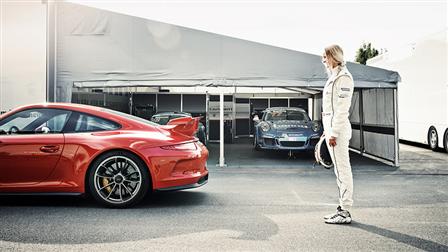 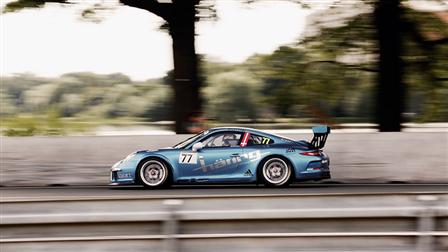 Michelle Gatting slides her 1.81-meter frame into the bucket seat of the 911 as though it were a custom-fit tube dress. “The seat is just like a real racing bucket seat, but still comfortable,” she says. Thanks to the long thigh support, there is even sufficient grip for her legs. Before heading off to the racetrack, she purposefully presses the Sport exhaust button: “That makes the engine sound even more like a race car!”

If you want to feel something, you should hear it as well. No sooner has she fastened her seat belt than she reaches for the paddle shifts on the steering wheel. Changing gears like this is second nature to her. The Cup vehicle based on the 991 model generation also has these paddles on the steering wheel. “I always get that race-car feeling when I sit in a street-legal car with my fingers on the paddle shifts,” says Gatting. But that great feeling is underscored by technical aspects: “The PDK transmission is just plain awesome.”

The 911 GT3 features a radically overhauled double-­clutch transmission (PDK). Initially designed for racing, it has the characteristics of a sequential racing transmission. The response times are in a range once reserved for the realm of motorsports. The “quick shift” even makes reaction times of less than 100 milliseconds possible. The professional’s verdict? “Superfast gear changes, absolutely perfect: it doesn’t get any better than this in a road-­going car.” In her Cup car, a six-speed constant mesh transmission developed by Motorsports takes over the task of transmitting the race car’s 338 kW (460 hp) to the rear axle by means of a self-locking differential. 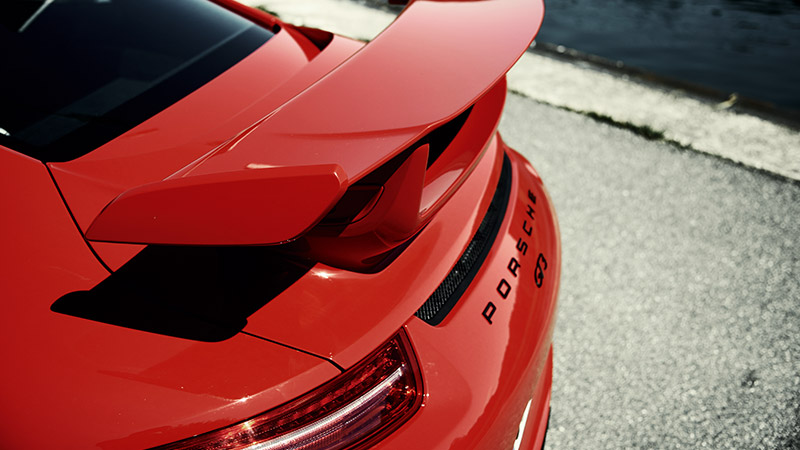 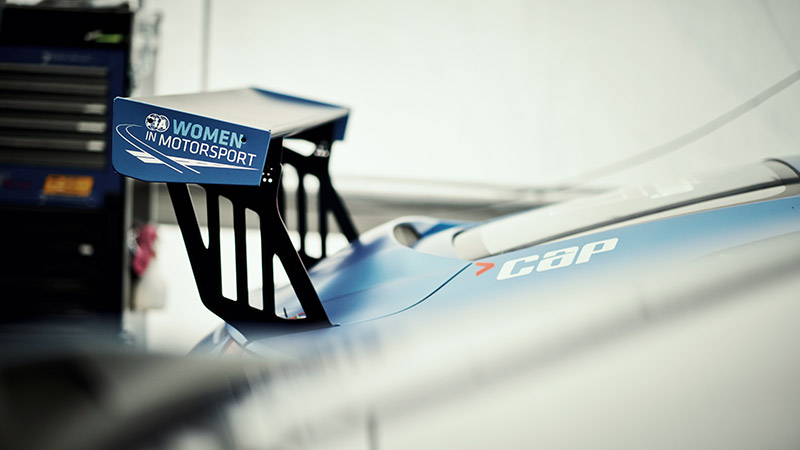 Differences: The most visible difference on the 911 GT3 Cup is the significantly higher rear wing

For the drive through town, Gatting selects the Automatic option and serenely rolls through the heavy traffic, although she herself seems increasingly restless. “I confess that it’s really hard for me to drive so slowly in a car like this,” she says with a sigh. “I really think it’s great that the 911 GT3 is so perfect for everyday situations and that you can use it to just cruise through town. But for me personally, I’d rather be on the highway or at the racetrack.” This native of Denmark is not the only one who needs to experience this super athlete at the limit, to tease out the maximum performance, to see how far she can go. Around 80 percent of all 911 GT3s sold are driven on racetracks, as well. That is where the dynamic handling of the —the focus of development—really shines. The lap time of 7 minutes 25 seconds on the Nürburg­ring’s legendary Nordschleife underscores it all: You have reached your destination. 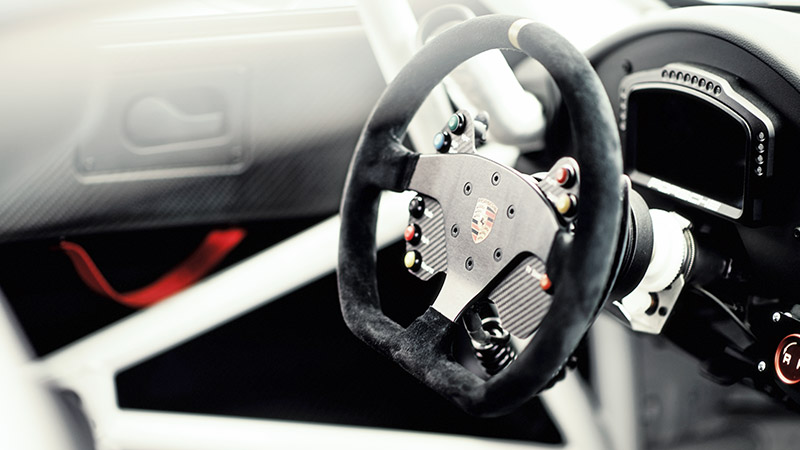 Maximum grip: The steering wheel has been replaced by a smaller racing version in the Cup car

Having arrived at the temporary Norisring city racecourse, Gatting vanishes into the truck of her Attempto team. Out of her leisure apparel, into her racing overalls. The 911 Cup, number 77, is waiting in the team tent. Her race car. It is strikingly similar to the bright red 911 GT3 that she has just parked. If you disregard the colorful sponsor stickers, the most visible difference is the significantly higher rear wing on the Cup car. But Michelle thinks a generalization is in order here: “They’re the same cars, no question about it.”

There are, of course, further differences between the street-legal and the racing version. This becomes crystal clear when you take a look at the cockpit. In the street-legal version, black Al­cantara, brushed aluminum, and leather create an ambience at once elegant and sporty. In contrast, the interior of the 911 Cup was pretty much cleared out. Only the racing bucket seat with six-point seat belts, a fire extinguisher, and the safety cage remain. The interior is unquestionably austere. The significantly smaller steering wheel is adorned with a number of colorful buttons, but in a nod to brotherhood, the rim is covered by black Alcantara®.

There was a reason for this crash diet: weight. And yet, at 1,430 kilograms (empty), the street-legal GT3 is already a lightweight. But the racing version weighs a mere 1,175 kilograms, a full 255 kilos lighter. Soundproofing was also sacrificed in the name of weight reduction. Loud? Naaaah. Gatting enjoys the soundscape: “This way, you hear the boxer engine even better.” It’s music to race by. She also gets a quiet kick out of seeing what happens when a layperson opens the driver’s door on the Cup—and gets a fright. “The door is made of carbon, so light that people practically tear it off when they swing it open in the usual way.” Lightweight construction was specified for the street-legal 911 GT3 as well. Those red doors are made of aluminum and thus they, too, weigh very little.

Some stretches of the city racecourse have already been blocked off, allowing Gatting to step on the gas in her street-legal 911—for the perfect comparison, as it were. The engine speed concept could have been created with her in mind. This is the first street-legal 911 to feature gasoline direct injection. In combination with other high-­performance details and a rocker arm valve control, the result is a high-revving engine that can achieve up to 9,000/min. Michelle Gatting is in her element. The new, active rear-­axle steering system enables particularly dynamic cornering maneuvers in the GT3, and it is even more agile on bends. She is elated about that, too, because this gives the car the maneuverability of a racing kart, which is where she—and nearly all young race drivers—first learned her craft.

The rear-axle steering also enhances the car’s day-to-day usability. It is triggered by the system at speeds below 50 km/h. The result is a smaller turning circle, which facilitates maneuvering and parking. Stability at high speeds is increased as well. Gatting gazes at the road ahead, which will be the Norisring start/finish straight, and muses, “It’s a strange feeling to know that two days from now I’ll be sitting in a race car, taking a switchback at 250 …” 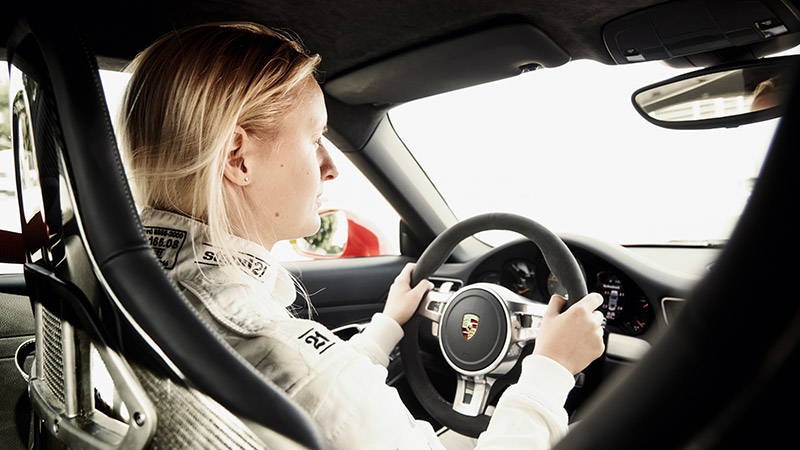 The 911 GT3 features a radically overhauled double-clutch transmission (PDK). The response times are in a range once reserved for the realm of motorsports.

In a race, Gatting has to forgo most of the electronic support with which the street-legal version pampers its drivers. No ABS, no PSM ( Stability Management), no traction control, no traction slip control system. “You’re supposed to learn to control the handling performance by means of the gas pedal, brake, and clutch,” Gatting says, explaining the purpose of the Cup rules. “It’s the driver’s skill that counts.” In motorsports, it’s safe to say that anyone who is fast in a 911 will be fast in any other racing car as well. And Gatting has proven the truth of this rule of thumb in an unusual driving test. She was one of ten young European drivers invited by the Fédération Internationale de l’Automobile to participate in a comprehensive selection process in order to qualify for prestigious sponsorship by the FIA Institute Academy. How did it go? “I was the fastest in Europe,” the tough girl says softly.