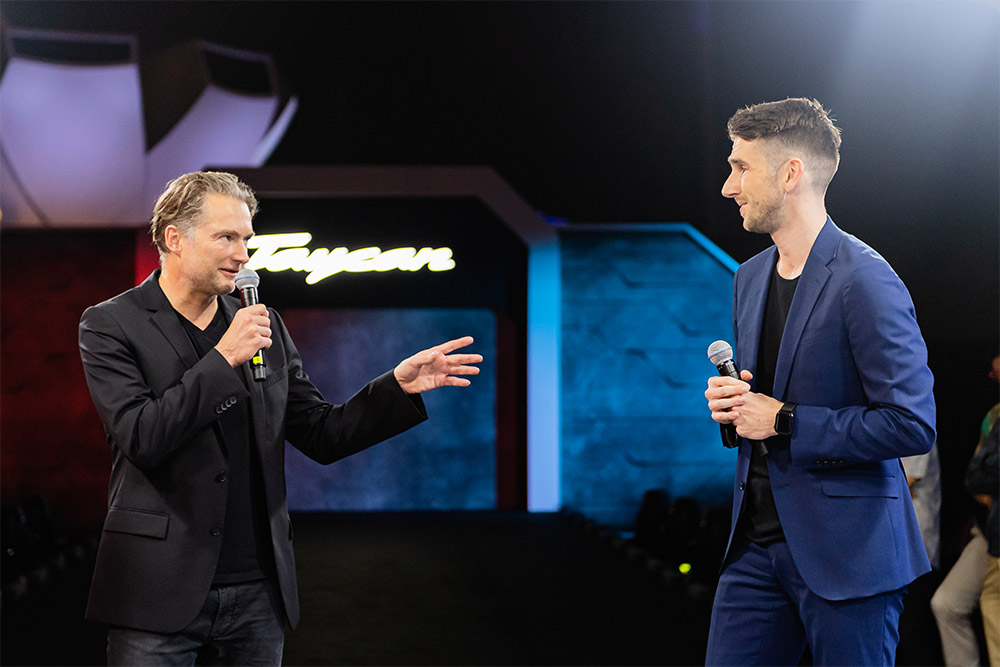 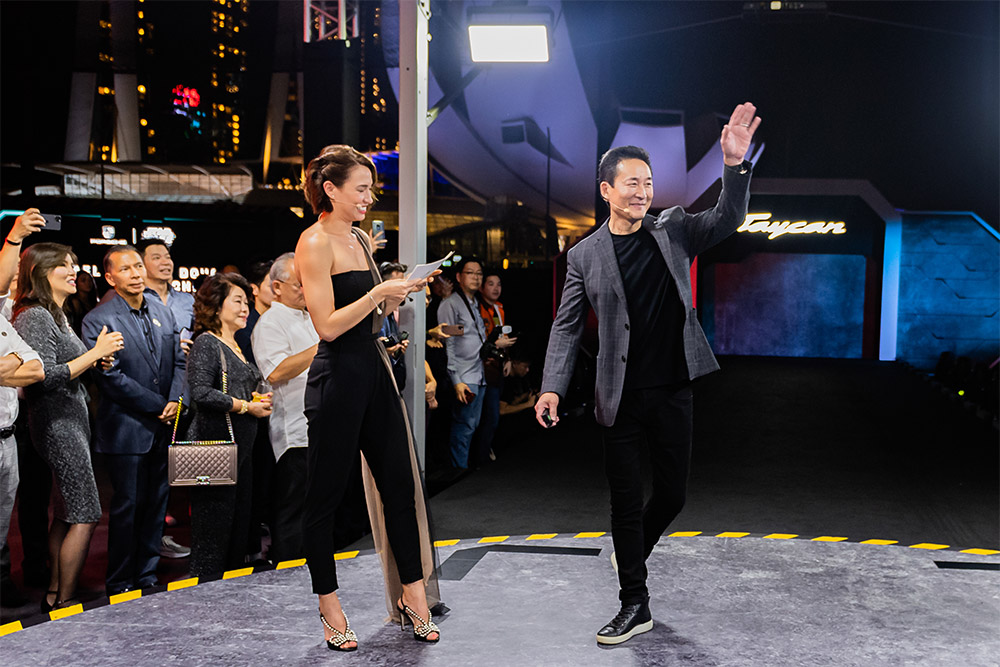 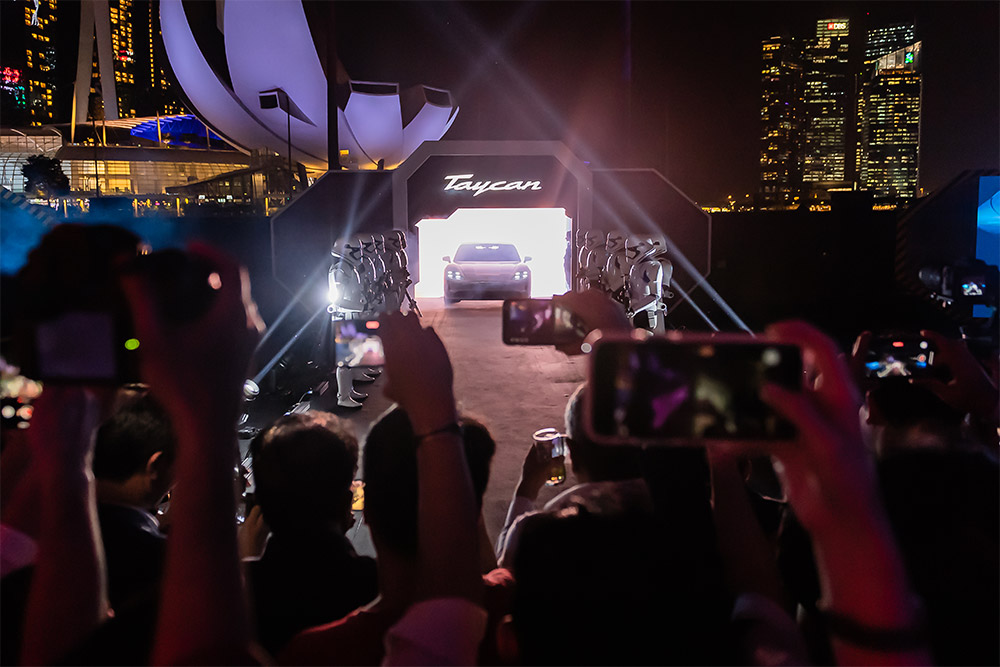 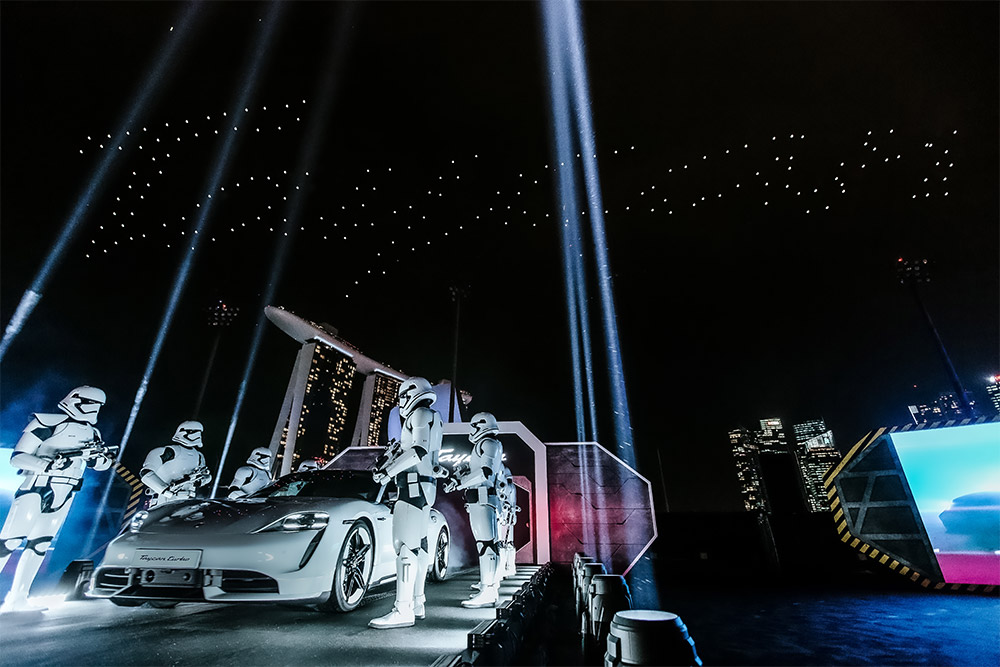 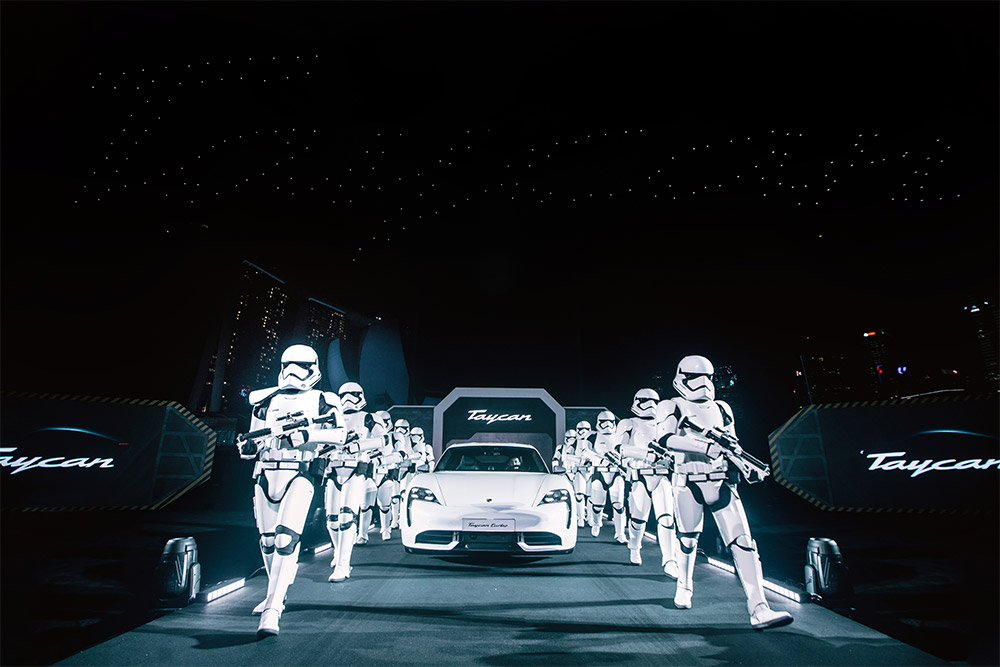 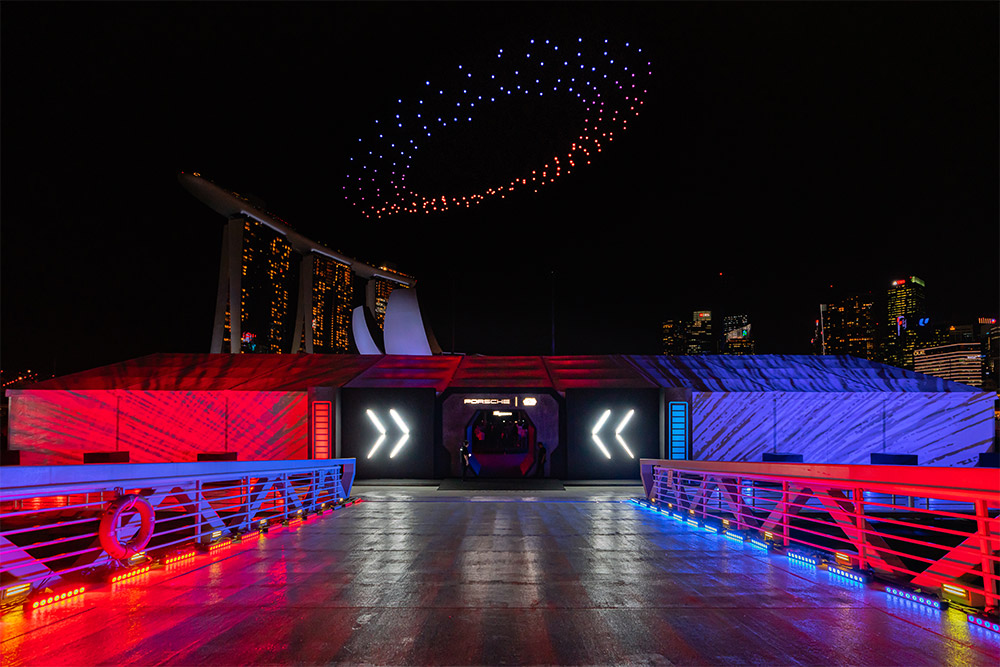 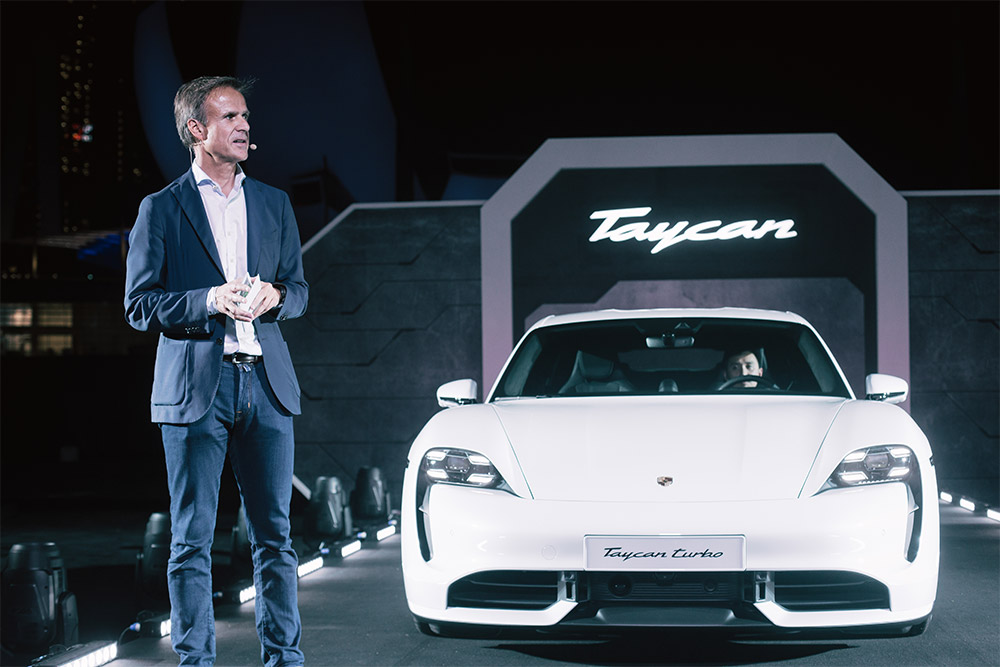 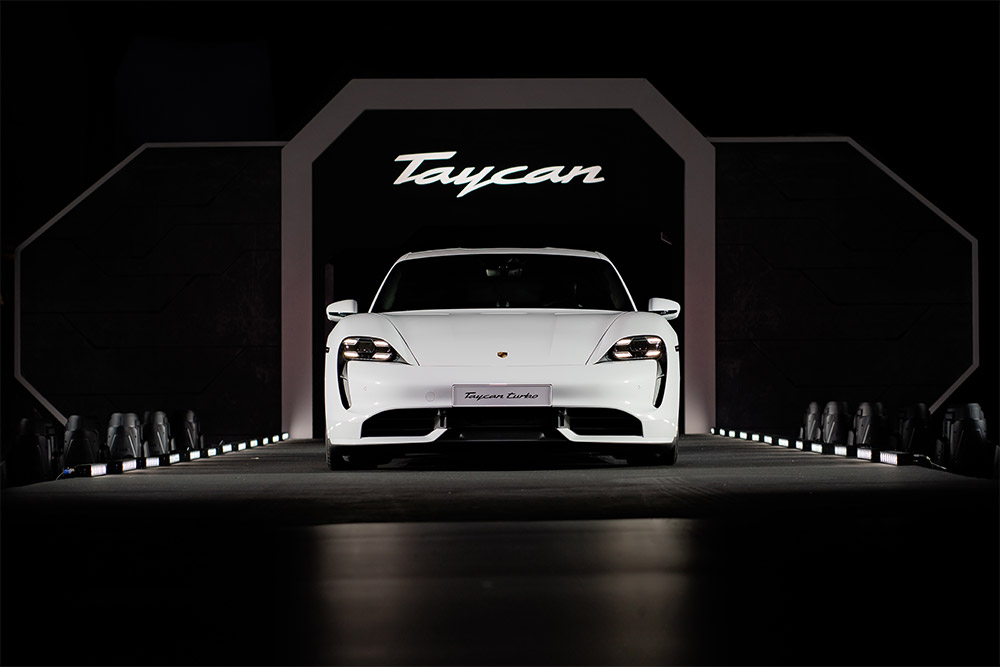 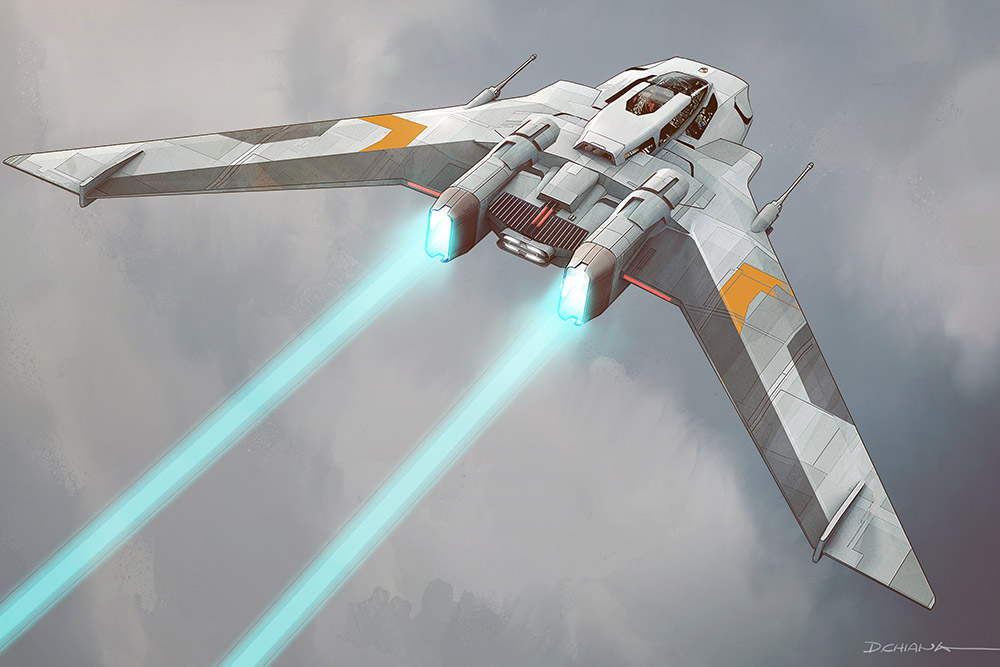 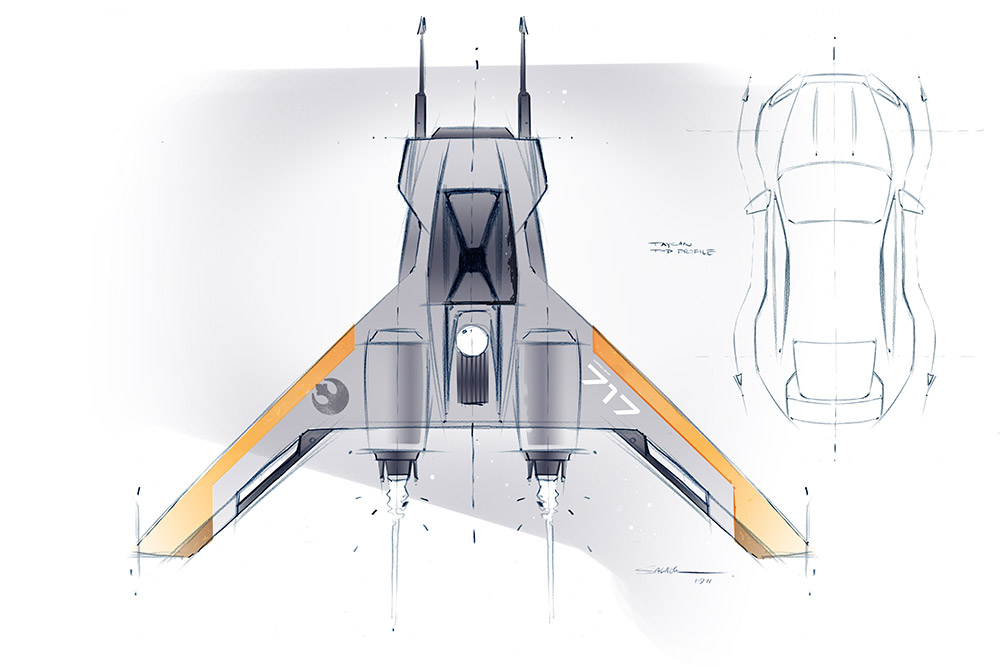 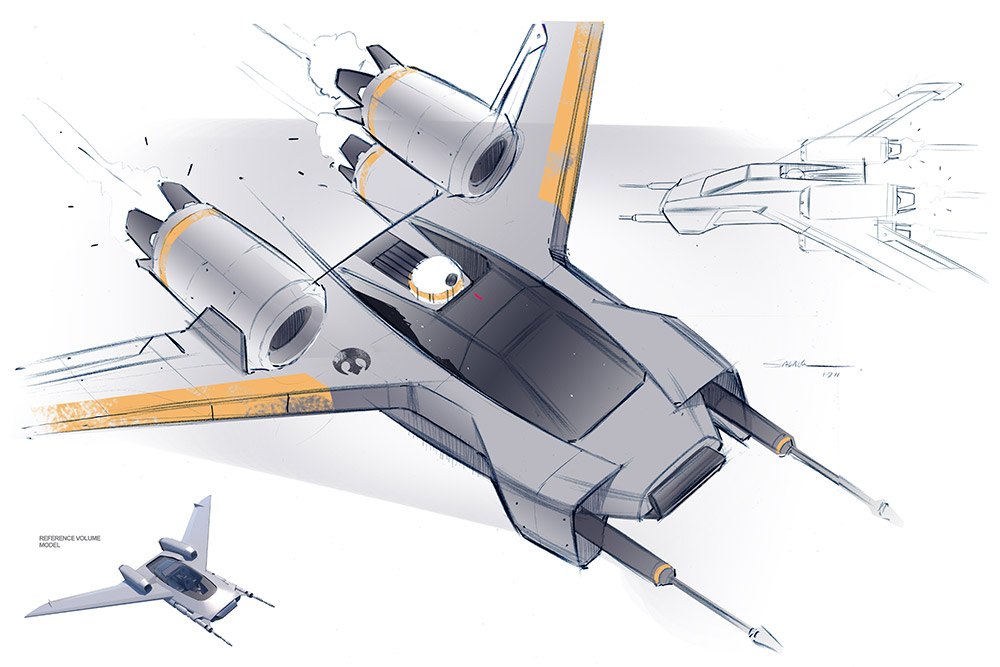 • Themed ‘Soul, electrified’, a drone show was orchestrated to highlight the features of the new

• Designers from and Lucasfilm also presented the jointly-designed fantasy starship sketches ahead of the world premiere of Star Wars: The Rise of Skywalker

Singapore, 22 November 2019. Two legendary icons, and Star Wars, joined forces at the Asia Pacific premiere of the new all-electric in Singapore last night, ahead of its regional market launch in 2020. A spectacular drone show was orchestrated during the premiere of the , themed ‘Soul, electrified’ to highlight the features of the latest model.

"The links our heritage to the future. It is a fascinating sports car with exciting driving dynamics, performance and technology – and like every ever built, it comes with a soul. Something you will feel immediately, once you get behind the steering wheel,” said Arthur Willmann, Managing Director of Asia Pacific.

"Asia Pacific is an important sales region for – with a continuously growing customer and fan base. With the , we are entering a new era and this spirit fits perfectly with the iconic Star Wars brand and the joint event here in Singapore,” says Matthias Becker, Vice President Region Overseas and Emerging Markets of AG.

Michael Mauer, Vice President Style at AG, who was present at the event, shared the design philosophy behind the vehicle. “Designing the was one of the most exciting tasks, because the only certainty was that it had to be recognisable as a at first glance. And by pursuing the strategy of making it the sportiest in the segment, we have defined a new architecture for purely electric vehicles. Just like what the 911 has achieved, my vision is that the will become an icon of this new era, a synonym for a purely electric sports car,” he said.

As part of the unprecedented collaboration, the design teams at and Lucasfilm collaborated to design a fantasy starship in support of the upcoming Star Wars film, the final episode of the Skywalker saga. Mauer, together with Doug Chiang, VP Creative Director, Lucasfilm, explained the design process and presented design sketches of the spacecraft highlighting the combined and Star Wars design DNA.

Chiang said, “Although one brand is placed in a fantasy universe and one in the real world, it’s interesting that both are defined very much by their iconic design principle. The basic challenge of the design brief was to design a starship that would both be true to the Star Wars universe and design DNA.”

About
The first all-electric sports car, the , marks the beginning of a new chapter for as the company expands its product range in the field of electromobility. Like any , the is the sportiest car in its segment.

The flagship S version of the can generate up to 761 hp overboost power in combination with Launch Control, and the up to 680 hp. The S accelerates from zero to 100 km/h in 2.8 seconds, while the completes this sprint in 3.2 seconds. The S has a range of up to 412 kilometres, and the a range of up to 450 kilometres (according to WLTP in each case). The top speed of both all-wheel-drive models is 260 km/h.

The is the first production vehicle with a system voltage of 800 volts instead of the usual 400 volts for electric cars. This is a particular advantage for drivers on the road: in just over five minutes, the battery can be recharged using direct current (DC) from the high-power charging network for a range of up to 100 kilometres (according to WLTP). The charging time for five to 80 percent SoC (state of charge) is 22.5 minutes for charging under ideal conditions, and the maximum charging power (peak) is 270 kW. The overall capacity of the Performance Battery Plus is 93.4 kWh. drivers can comfortably charge their cars with up to eleven kW of alternating current (AC) at home.

The has two exceptionally efficient electric machines, one on the front axle and one on the rear axle, making the car all-wheel drive. The two-speed transmission installed on the rear axle is an innovation developed by . First gear gives the even more acceleration from a standing start, while second gear with a long gear ratio ensures high efficiency and equally high power reserves. This also applies at very high speeds.

About Asia Pacific Pte Ltd
Asia Pacific Pte Ltd, a subsidiary of Dr. Ing. h.c. F. AG, commenced operations on 1 October 2001 and currently oversees 13 countries from its headquarters in Singapore: Brunei, Cambodia, French Polynesia, Indonesia, Malaysia, Mongolia, New Caledonia, New Zealand, the Philippines, Singapore, Sri Lanka, Thailand and Vietnam. Playing the role of market incubator together with its importer partners, it offers support in After Sales, Business Development, Marketing, Public Relations and Sales, helping markets to further professionalise operations and cater to customer needs to ultimately grow their business. In 2018, the Asia Pacific region delivered 2,147 vehicles of the 911, , , , 718 and 718 models to its customers, a 6% increase compared to the previous year.

*The consumption and emission values above were calculated according to the new Worldwide Harmonised Light Vehicle Test Procedure (WLTP). The NEDC values derived from this must continue to be specified for the time being. These values cannot be compared with the values calculated on the basis of the previously used NEDC measuring procedure. Price, emission and consumption values according to local measurement requirements will be determined upon homologation in Singapore.