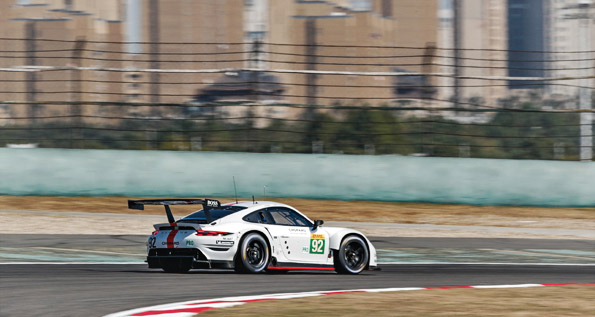 Stuttgart. The second pole position at the third round for the new 911 RSR: Kévin Estre (France) and Michael Christensen (Denmark) beat the competition in the qualifying on Saturday on the 5.451-kilometre Shanghai International Circuit with a fabulous combined time of 1:59.579 minutes. At round three of the 2019/20 FIA World Endurance Championship in China, the identical 515 hp sister car driven by Gianmaria Bruni (Italy) and Richard Lietz (Austria) heads into the four-hour race from position six on Sunday.

The Shanghai International Circuit showed its best side during qualifying, with blue skies and temperatures of around 22 degrees Celsius. The two new 911 RSR used different strategies for the session, as the racetrack on the outskirts of the metropolis with its 23-million inhabitants is famous for putting heavy stresses on the tyres due to its rough asphalt and long, sweeping corners. Estre and Christensen completed the qualifying with two sets of tyres, while Bruni and Lietz used just one set and saved the fresh rubber for the race.

The GT Team can look back on a positive season so far: After setting the second pole position at the third race and with a victory at the season-opening round in Silverstone, Great Britain thanks to Bruni and Lietz, as well as a podium result in Fuji (Estre and Christensen), leads the manufacturers’ championship of the FIA World Endurance Championship. These achievements also underline the great potential of the new 911 RSR (2019 model year), which is based on the high performance 911 GT3 RS* road-going sports car.

In the GTE-Am class, the German customer team Project 1 secured the first grid spot. Young Professional Matteo Cairoli (Italy) tackled the qualifying with Egidio Perfetti (Norway). In the race, the pair shares the cockpit of the No. 56 vehicle with David Heinemeier Hansson from Denmark. The No. 57 sister car of the German squad will take up the race from fifth on the grid. The three identical, ca. 510 hp vehicles fielded by Dempsey-Proton Racing will take up the race from positions three, eight and eleven. Gulf Racing achieved the ninth quickest time in qualifying.

Alexander Stehlig (Head of Operations FIA WEC): “We experienced a diverse qualifying. One car at the front, one at the back; we split the strategies for the two vehicles. Claiming the second pole position at the third race is, of course, great for us. We did our homework. Position one is the perfect place to start the race.”

Kévin Estre ( 911 RSR #92): “My lap was simply perfect! We had a great setup for the car. In these temperatures, we experienced slightly more understeer compared to this morning’s free practice. Still, we were good enough for pole position. In my opinion, on this circuit you have to drive a little under the limit here so that you don’t make a mistake. Previously I was often dissatisfied with my qualifying, but now I’m really pleased.”

Michael Christensen ( 911 RSR #92): “I found it tough because I made a couple of minor mistakes. But in the end I managed a good lap. Kevin then turned a perfect lap. We’re very clearly on pole. Some of the teams behind us only used one set of tyres. I’m pleased about earning the extra point for the fastest qualifying lap.”

Gianmaria Bruni ( 911 RSR #91): “My first laps were okay. Richard then went out on the same set of tyres. Our average today wasn’t so great, but we have a good strategy for the race. We know that we have the backing of the best team in the WEC. So, anything is possible tomorrow.”

Richard Lietz ( 911 RSR #91): “The car felt really good. The balance is great for the race. We deliberately split the strategy. I expect the tyre wear to be extremely high in the race, hence we’re hoping for an advantage after using only one set of tyres today.”

Matteo Cairoli ( 911 RSR #56 GTE-Am): “I’m happy that Egidio, David and I take up the race here in Shanghai from pole position in the GTE-Am class. I had two good laps. In the first lap I was hampered a bit by another vehicle, but then I got a free run and I’m happy that I managed to pull all of my fast sector times together.”