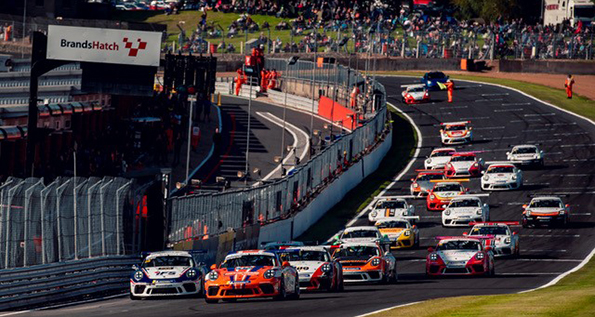 Lewis Plato (JTR) and teammate Tom Wrigley (JTR) each took overall victories, underlining the speed of JTR, 2018 Cup GB Team champions. Wrigley entered the weekend as the final Pro category title contender, but his mathematical chances of the title were ended in the penultimate round. This left Ellinas and Zamparelli to continue their duel, with a 'winner takes all' final after Round Fifteen left the pair tied on points. Plato claimed victory in Race One – the milestone 300th race since the championship’s inception in 2003 – while Wrigley notched up his fourth win of the season in Race Two.

Race one
Round Fifteen – the milestone 300th Cup GB race since the championship’s inception in 2003 – saw 17-year-old GB 2018 / 2019 Junior Dan Harper (JTR) start on pole position. Joining Harper on the front row was championship leader Dino Zamparelli (Redline Racing), while Lewis Plato (JTR) and title contender Tom Wrigley (JTR) lined-up on the second row of the grid. The third championship hopeful, Tio Ellinas (Slidesports Engineering), started in sixth under dry and sunny conditions ahead of a race scheduled for 17 laps.

Zamparelli made the best start off the front row as the lights went out, passing Harper into Paddock Hill bend, Plato quickly followed him through while Ellinas made up two places to arrive at Druids in P4. Rory Collingbourne (Redline Racing) made his way into the lead of Pro-Am with category challengers Jamie Orton (JTR) and Seb Perez (Amigos Team Parker) in P2 and P3. Iain Dockerill (Asset Advantage Racing) headed the Am category runners, with David Fairbrother (Slidesports Engineering) and former BTCC racer Richard Hawken (Slidesports Engineering) giving chasing.

On lap 4 Dan Vaughan (Motorbase Performance) retired from the race, ending his charge from the back of the grid and Pro-Am championship bid after contact. Soon afterwards leader Zamparelli ran wide at Hawthorn corner, clipping the grass which caused the car to spin – fluid from an earlier incident the most likely cause. Zamparelli's subsequent efforts to restart his engine brought out the Safety Car. On lap 6 the Safety Car returned to the pits restarting the race, Harper seeing a gap and mounting a challenge on Plato into Surtees for the lead. The result was a spin that left the top three: Plato, Ellinas and Wrigley.

On lap 10, 2018 Am category champion Peter Mangion (Team Parker) spun from P3 in category, ending his race in the gravel trap and subsequently triggering a second Safety Car period to allow his car to be recovered – the race restarted on lap 14. Though Wrigley looked for a way past Ellinas for P2, there was no way through before the chequered flag appeared. Another podium marked Wrigley's season-long pace, but removed him from championship contention in the final round of 2018. Plato's overall victory was his second of the season and raises JTR's win tally to ten – the fourth highest of any team despite just two years spent in the championship.

In Pro-Am, Collingbourne made his maiden visit to the top step of the podium in his first meeting with Redline Racing. Orton returned to form in second, while third was enough to see Seb Perez crowned 2018 Pro-Am champion. Despite the Am title having already gone to Mangion, Dockerill claimed his category second win of the season with Fairbrother and Hawken joining him on the Am category podium.

The result from Race One left Zamparelli and Ellinas tied on championship points going into the final race. As part of the 2018 podium procedure, overall winner Plato selected at random the number 6 ball, which reversed the grid positions of the top six overall race finishers from Round Fifteen. This formed the starting grid for Round Sixteen; Caine, Jackson, Gamble, Wrigley, Ellinas and Plato.

Despite fighting back after the second Safety Car period, Zamparelli was faced with chasing down Ellinas from 13th in Race Two, while Harper's own recovery saw him start the final race of the season from ninth on the grid.

Race two
Tom Jackson (GT Marques) and guest driver Michael Caine (Motorbase Performance) ran side by side into the first corner, the pair making contact resulting in Caine collecting a half spin before continuing his race. Jackson managed to stay ahead, Tom Wrigley (JTR) and championship hopeful Tio Ellinas (Slidesports Engineering) moved into second and third places respectively. Out of Druids, Dino Zamparelli (Redline Racing) and Seb Perez (Amigos Team Parker) made contact, Perez leaving the circuit causing his retirement. As a result the Safety Car was called into action to enable the recovery of Perez's car.

On lap 5, 17-year-old GB 2018 / 2019 Junior Dan Harper (JTR) and Zamparelli, already up to P7 from his starting position of P13, overtook Collingbourne to take fifth. Wrigley made a move past Jackson for the overall lead of the race, a position he would hold to the flag. Lewis Plato (JTR) and Ellinas took several more laps to find an opportunity to pass, a gap on the exit of Graham Hill immediately used by Plato and loosing Jackson momentum. Ellinas, Harper and Zamparelli demoted Jackson to P6 after an impressive opening for the series newcomer. Zamparelli could now see title rival Ellinas ahead in P3, with Harper in-between the pair.

Knowing that he needed to catch and pass Ellinas in order to secure the Pro category championship, Zamparelli closed on Harper but to no avail, later falling back from the Junior as the Bristolian saw his title hopes fade. In their battle for the Pro-Am podium, Orton and Hawkey made contact, Orton shortly afterwards leaving the track and ending his race in the gravel trap at Hawthorne. That left the Pro-Am order as Collingbourne, Dan Vaughan (Motorbase Performance) and Justin Sherwood (Team Parker Racing).

Having pulled away at the front, Wrigley took the checkered flag for his fourth victory of 2018. Plato finished second with Ellinas third – Zamparelli crossed the line in fifth – the result enough to secure Tio Ellinas the 2018 Cup GB overall championship. For their performances at Brands Hatch, Ellinas was handed the Driver of the Weekend accolade, Slidesports were awarded Team of the Weekend.

The reports of previous seasons can be found in our news archive.